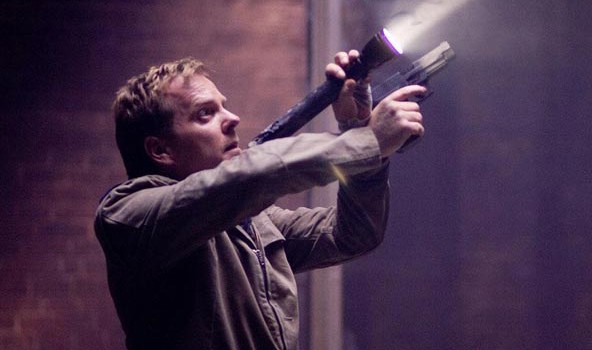 Kiefer Sutherland talks Stand By Me, Jack Bauer and supersticions as his new horror movie, Mirrors, is released in the UK…

Tell us about your new movie, Kiefer…

I play a character called Ben Carson in Mirrors. He’s a guy who is at the end of his rope. He’s lost his job as a police officer for a questionable shooting that he’s not guilty of. His wife has left him and his self esteem is in the toilet. This is a guy who takes a job as a security guard to move on with his life in an effort to save his family – and that’s when the horror starts.

Are you a fan of horror movies?

I love horrors like The Shining, The Changeling and my father’s remake of Invasion Of The Body Snatchers because they’re character-based and driven by story rather than the horror. They start off as normal dramas and you become invested in the characters, which is exactly what Mirrors does. They’re the best kind of horror movie.

Did you enjoy making Mirrors?

It was a really fun film to make. The director and I were like seven-year-old kids hiding behind lockers waiting to scare a friend. We approached scenes with that kind of excitement. There were scenes that were very dramatic, but there were some scenes where we knew we were going to scare people with this – and there was a real joy in doing that.

How many mirrors did you break during filming?

If there is a mirror god, I had a prayer or conversation with him. I told him I was being made to do this by the director, who is not scared of mirrors and doesn’t have any supersticions with regards to them. I said, “If you really do exist, he’s the one to get because he made me do this.” I only destroyed a few mirrors. The director destroyed a lot, so they’ll be coming after him long before me.

Where did you shoot the film?

We shot in Romania and one of the difficult things about shooting in Romania was that nobody spoke English on the set. And I don’t speak Romanian. There was a lot of sign language during filming.

Is this your first horror movie?

What’s been the highlight of your career?

Stand By Me, The Lost Boys, Young Guns, A Few Good Men… That was a great run of films. I also got to do some isolated great movies, such as Dark City, which was another film I am immensely proud of. I was honoured to be able to work with the director, Alex Proyas. And then there’s 24, which has been the gift of a career and the gift of a lifetime.

How proud are you of Jack Bauer and 24?

I love being able to work and being able to do this for a living. I love acting and 24 has given me an opportunity to do this in a way I’ve never done before. I watched the Olympics and realised how those people swim every day and run every day. They train at it every day. Acting is no different. It’s a muscle – and to be able to do it five or six days a week for eight years straight has put me in a place where I feel more confident and developed as an actor than ever before.

Did you know 24 was going to be successful when you first started to make it?

You can never predict something like that. I remember reading an article when 24 started to do well and the beginning of the article said, “Keifer Sutherland: back from the dead.” Wow, I knew it was bad – but I didn’t realise my career was in that bad shape. I guess you find those things out later.

How did the writers’ strike affect the production of 24?

The break in production was something that no-one wanted to do. I don’t think the writers wanted to do it, the actors didn’t want to do it and [producer and director] Jon Cassar didn’t want to do it – but it happened nonetheless. I think the show is at its best when it’s released continuously, so it was a good idea to delay the show so that viewers can watch all 24 episodes in a row.

Were you upset with the disruption caused by the strike?

Well, if you are looking for a silver lining, there is one benefit to the disruption. The most difficult thing for 24 is the writing, so the break gave the writers an unbelievable amount of time to really craft the new season. As actors, we had scripts available to us, which we’ve never had in the past six years of making the show – and I believe it’s the best work we’ve ever done. The 24 movie and the seventh season are the best we’ve worked on, so it’s worth the wait.

Catch Kiefer Sutherland in Mirrors when it is released in UK cinemas on October 10.