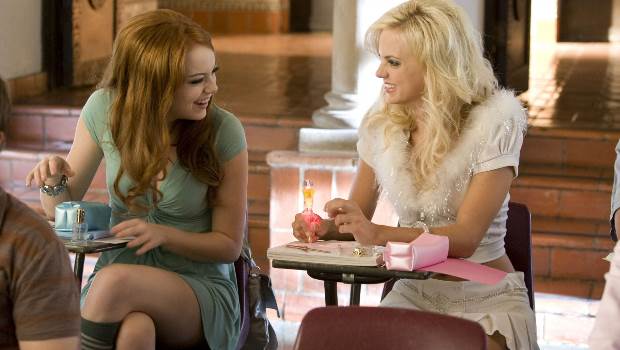 Summary: It’s great to see another film in which girls are front and centre. And it is very very funny.

I had very low expectations of The House Bunny; frankly I expected it to be dreadful. The premise is this: Shelley Darlington (Faris), a dimwitted but amiable Playboy bunny, is kicked out of the Playboy Mansion and finds herself a job as House Mother to a bunch of socially inept college girls. Recipe for disaster? No, thanks pretty much entirely to a gutsy and fantastic performance from funny girl Faris, endearing and hilarious in her first leading role.

Shelley, raised in an orphanage, is a lonely and unwanted child until puberty hits, and suddenly she discovers that she has powers over the opposite sex. She becomes a Bunny, which she loves. Her only ambition is to be a centerfold; otherwise her life is carefree, shopping with the other bunnies and watching movies with Hef. But when she gets booted out, she has nowhere to go. Having spent her whole life in one institution or another, she is drawn to the sorority house of the Phi Iota Mu’s, a snobbish clique of popular and beautiful girls whose house mother, Mrs Hagstrom (Beverly D’Angelo), makes it clear that they have no need for Shelly’s kind.

The seven girls of Zeta Alpha Zeta could not be more different. Led by Natalie (Superbad’s Stone), their sorority president, they are about to lose their house due to a lack of pledges. With no clue as to how to increase their campus standing, and they see Shelley as a lifeline. Shelley knows about boys. And if the girls can attract boys, they will get pledges, and then they might be able to keep their house. In order to do this, she sets about making the girls cool and cute and popular – and in the words of Clueless’ Cher ‘who doesn’t love a makeover?’

Thirteen Going On Thirty, Mean Girls, and now The House Bunny. Its another guilty pleasure and its all down to Faris. She flings herself into the role of Shelley and manages to make her at once charming, potty-mouthed, vulnerable and sweet. Shelley is simultaneously innocent and sophisticated; having defined herself in terms of her value as a sex object, she has a peculiarly skewed view of the world. When she meets Oliver (Hanks), she tries to play him according to the rules of her world, not realising that he likes her best when she is being herself. Her friendship with the Zetas shows her that there is more to her than a great rack and ability to walk in six inch heels.

Some may question the message of the film, thinking that it tries to have its cake and eat it, but I liked the sisterly quality of the Zetas. The fraternity and sorority systems are a bit of a mystery to us Brits, but the Zeta house is one of tolerance and it’s also great to see another film in which girls are front and centre. And it is very very funny.