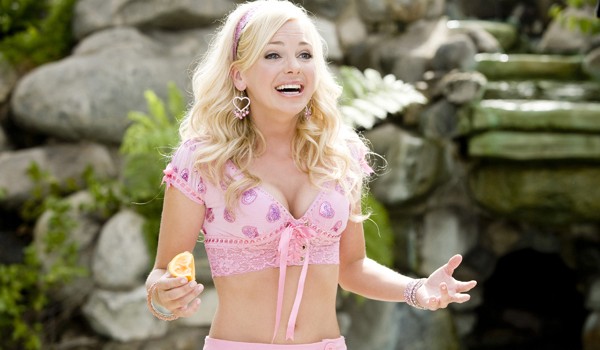 “I have not followed my House Bunny work-out regime since the movie wrapped,” admits Anna Faris as she walks into a plush Beverly Hills hotel suite for our interview – but you’d never know looking at her slender figure. “I did a lot of running and Pilates to get into shape – and I was really good about what I ate. It was awful. I hated it. I ate a lot of protein, so there were loads of eggs, turkey and almonds. But then I made a list of all the foods I was going to eat when the movie wrapped. What was on the list? Lots of cheeseburgers and nachos. All the good stuff.” The Hollywood starlet – who found fame in the Scary Movie films – sinks into her chair and smiles. “Right, hit me with your questions,” she purrs. “I’m ready for anything…”

The House Bunny is produced by Adam Sandler’s production company… How did he become involved in the project?
Well, we pitched the idea of House Bunny to Adam Sandler and he immediately loved it. This is my first time producing and it usually takes a few years to get a new project rolling, but Adam Sandler likes to make movies right away. When he agreed to the movie, we were shooting a month and a half later. It was amazing. He’s been so supportive and he wrote a bunch of jokes for the script. He would come to the set and give his opinions. I was thrilled to have his support.

Which jokes did he come up with?
He added a bunch of jokes, but the one I remember the most is at the very end of the movie. Colin Hanks’ character says, “A little bird told me.” And my character says, “I’ve got to meet this fricking bird!” I thought it was taking Shelley too far. She was being too stupid – but the director explained that Adam wrote the joke, so I went with it. I figured if I could deliver the line with enough sincerity then it will work.

Who came up with the idea of the Exorcist voice in the movie?
That was the director’s idea. We didn’t have a lot of jokes for that scene, so when we went to film it, he said, “Why don’t you say the names in a funny voice?” I don’t really do funny voices, but this inner demon just came out of my mouth – and it really freaked out the girls on set because they didn’t know I was going to do it. At one point, we thought it was almost too absurd and too strange for the movie. We thought we would have to cut it out, but people loved it and now I have to do the voice all the time.

You filmed scenes at the Playboy mansion. What do you think of Hugh Hefnor’s bunny girls?
It was really fun to be a part of that world for a small amount of time. All of the girls were really sweet to me and very welcoming. I think they went out of their way to be very gracious and friendly. They were very enthusiastic to me about the movie and Hef was great.

Were you really on the Playboy cover for September?
Yes I was, but I’m not naked. I’ve got a funny story about that, actually. I was in New York last week and these guys shouted at me, “Hey, we bought the Playboy because we thought you were going to be naked. You’re not naked. We want our money back!” I didn’t know what to say.

Did Playboy ask you to strip?
They did, but I wouldn’t do it. They understood it was all done to promote the movie anyway – and it’s not like I got paid or anything. I’d have to get paid to do that!

Playboy bunnies aren’t known for their intellect. Do you have any hidden talents?
I really like to cook. Oh, and I can do a great Exorcist voice. The naughtier side of me is very good at social drinking, too. I can hold my own with the boys. What’s my poison? I love tequila and wine. Not together, though. That would be disastrous.