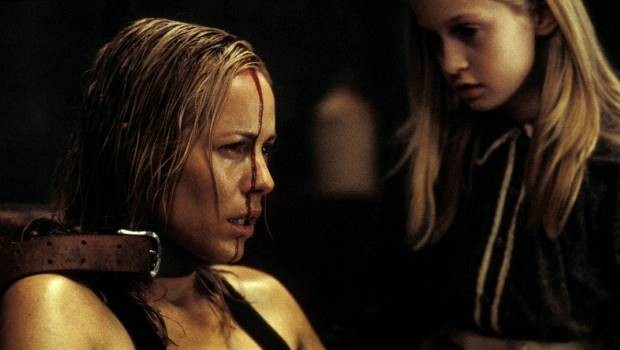 Summary: There are a few effective and genuinely creepy shocks in this film.

Notable for perhaps being the only film to explore the potential of the humble sheep as a horrific motif, director John Fawcett’s rural horror is far removed from the Canadian suburban setting of his earlier – and far more effective – ‘Ginger Snaps’. Maria Bello plays Adele, a brittle New York career woman who travels with her troubled teenage daughter Sarah to the Welsh countryside so Sarah can visit her estranged father, James (Sean Bean), a reclusive artist.

Exploring the forbiddingly bleak countryside, and the equally sinister cottage where James lives, Sarah and Adele soon learn of a local legend, where a pagan community in the 1950s seemingly committed mass suicide by leaping off the headland and throwing themselves into the sea. Shortly afterwards, Sarah is swept away by a wave while playing on the beach, and while James desperately leads the rescue efforts, Adele begins to experience visions of a fey young girl, Ebrill (Abigail Stone), around the house.

When Ebrill appears in Sarah’s bed, she leads Adele to discover more about the religious community who lived in these parts, while local handyman Dafydd (Maurice Roeves) reveals his own connection to the community’s sacrifice of Ebrill to the ancient Celtic god of the underworld fifty years before. James tries to protect the young girl, but Adele becomes more convinced that a reciprocal sacrifice will be the only way she can get her daughter back from the dead.

There are a few effective and genuinely creepy shocks in this film. Bello’s character digging her daughter’s red jumper from behind the plaster of the bedroom wall, where it has been placed as a cry for help from the underworld, is one, while Stone’s otherworldly appearance and lilting Welsh accent combine to produce a disturbing performance from such a young girl. But the extensive and in many ways convoluted backstory requires too much pure exposition, and the pace is slow and meandering. Fawcett employs none of the irreverence and humour that made ‘Ginger Snaps’ so fresh, and while ‘The Dark’ is very well filmed (the sepia-toned scenes that take place on ‘the other side’ are very well done), there is a sense that we’re seeing nothing here we haven’t seen before. Bello is good, and the two teenage girls perform very well, but Bean is given practically nothing to do. Against all the odds though, the sheep do work well when presented as threatening and eldritch creatures – you’ll never look at them the same way again.