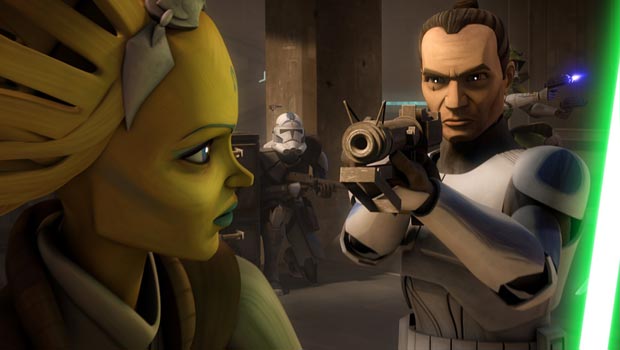 Summary: Lucasfilm has the cash to do justice to such a well-loved franchise: this will disappoint the hardcore fans, but the Star Wars youth will be entertained.

George Lucas has been more than happy to continue to add to the Star Wars universe since he finished his three prequels to the original trilogy. The Clone Wars takes its cue from an animated television series of the same name as it also sits between Attack of the Clones and Revenge of the Sith in the Star Wars time line and has no need for the original actors, only this feature-length entry uses 3-D CGI rather than more old school 2-D cell characters. Aimed firmly at kids, this first animated feature is all action but very little more.

As the Clone Wars rage, it is up to the Jedi Knights to maintain order and attempt to restore peace. Obi-Wan Kenobi and Master Yoda are leading the Republic’s clone army on the crystalline planet of Christophsis against the Separatist’s Retail Clan forces made up of the robots seen in the prequels – turned into a seemingly endless battle here. Meanwhile, Anakin Skywalker unwillingly takes on a Padawan learner in the form of the blue-skinned Ahsoka Tano eager to learn the ways of the Force. They are handed a mission to rescue Jabba the Hutt’s son Rotta, kidnapped to force Jabba to join the Separatists, and return him to the crime lord. However, they must go up against Count Dooku who is out to stop them.

There are plenty of familiar characters in The Clone Wars, rendered in CGI with an angular style which brings out the unique features of each but has more in common with less-spectacular offerings such as Madagascar and Ice Age than the effects-filled Pixar movies. This is surprising for a Lucasfilm effort, a studio which has a rich history in producing cutting-edge graphics and is a sign of the stripped-down nature of the movie. The story whips along at a breakneck pace of action sequence after action sequence while dialogue is reduced to a minimum much like a cartoon series: it is aimed at providing just enough information to bring about the next confrontation. Obi-Wan and Yoda, who still has a backward speech impediment more annoying than endearing, dish out a lot of commands to their army, leaving it to Anakin and Ashoka to gallivant around the galaxy, scything through the bad guys with their lightsabers while bickering like a couple of schoolchildren and looking after a baby Hutt, upping the cutesy factor. It all becomes tiresome despite the 94 minute runtime.

When George Lucas returned to the Star Wars franchise for the prequels, fans got special effects bonanzas and a return of the Force mythology they all loved: every effort was made to do them proud although Lucas wasn’t wholly successful in many eyes. Star Wars: The Clone Wars has little evidence of much thought going into expanding the Star Wars universe beyond giving only the youngest fans the chance to see their favourite characters in action. With only Samuel L. Jackson (a rarely seen Mace Windu), Anthony Daniels (C-3PO) and Christopher Lee (Count Dooku) the original vocal talent returning, it lacks even a full quota of stars behind the animation focused on high octane scenes. Lucasfilm has the cash to do justice to such a well-loved franchise: this will disappoint the hardcore fans, but the Star Wars youth will be entertained.