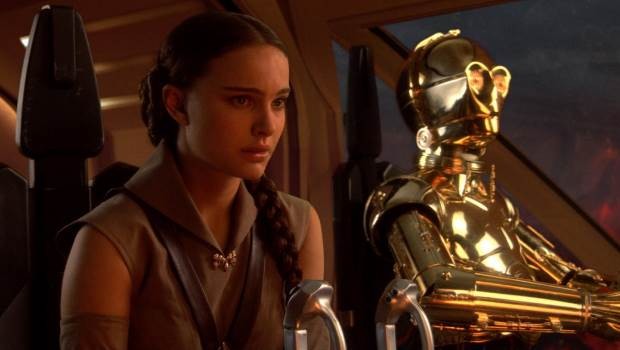 Summary: If you strip away all the nostalgia and look at all six film for film, Episode III is almost as good as Empire and better than all the others.

One of the most arresting scenes in Empire Strikes Back, as any fanboy will tell you, comes during Luke’s Jedi training session with Yoda in the swamps of Dagobah. Having spend a bit of time running around during what looks like some sort of dreadful circuit training exercise, Luke enters into a mysterious cave, in which he is confronted by Vader, who he beheads, only to find his own face behind the mask, representing the future possibility that he could wind up suffering the same fate if he succumbs to the Dark Side. Before entering, Luke asks Yoda what’s inside the cave, to which the little green dude replies “Only what you take with you.”

Where’s this self indulgent, meandering twaddle going, I hear you cry, if indeed you’re still reading. Well, this little exchange seems to sum up the whole prequel experience. Because the original trilogy is so special to so many, their reaction upon seeing the new films seem to directly reflect any preconceptions, expectations and fears that they carried with them when they went into the cinema. Of course this can be said of many films but it seems to take on a whole other level when it comes to Star Wars. I’ll come back to this in a mo, but now, on to the film.

Briefly, for those of you who’ve been living in a swamp on the outer rim for a while, this is about the fall of the republic, the birth of the Empire, the end of the Jedi and the turning of Anakin Skywalker into Darth Vader. Right, now that’s out of the way, we can crack on.

Revenge Of The Sith is brilliant. It’s as if it took Lucas two goes to get comfortable in the director’s chair and can now actually apply a bit of style to the proceedings. All the fanboy checkboxes can safely be ticked, as pretty much everything ties up neatly with the original trilogy; there are fantastic lightsaber battles, the best CGI ever committed to film and we finally see the final, dark days of intergalactic democracy as the Jedi are wiped out and the Emperor reveals himself in all his hammy glory. Be warned, the film is dark (killing children in cold blood anyone?) and more than earns itself it’s 12 A certificate.

But the film is more than an overtly extravagant case of join-the-dots; from the moment the film begins we are presented with something stylistically different from what we have seen before in any of the Star Wars films. The opening space battle is wonderfully frenetic and breathtakingly edited, recalling at once the opening of Saving Private Ryan and Touch of Evil, while rattling along a hell of a pace that doesn’t let up for the best part of half an hour. As the film races on, there are various moments of necessary exposition, but they are in no way as laboured or as stilted as those in Menace nor Clones; sometimes Lucas finally has the foresight to just let the visuals tell the story, which allows the film to flow. In fact the entire film moves along at a hell of a pace, climaxing in the most glorious piece of melodrama since Charlton Heston realized exactly what planet those damn dirty apes actually inhabited.

The other striking difference from the other prequels – and to be honest a lot of the original trilogy – is that there is some good acting in Sith and very little ropey dialogue. Hayden Christensen, Natalie Portman and Ewan McGregor all seem much more comfortable in the roles and both the banter between Obi Wan and Anakin and the romance between Anakin and Padme are much more convincing. Those nay sayers take another look at the opening dog fights and the moment Padme tells her husband that she’s pregnant for evidence of that. Christensen in particular aquits himself admirably in this one; he’s bulked up, lowered his voice an octave and is a much more commanding presence on screen than in Clones.

Support is reliable from Christopher Lee, Samuel L Jackson and Frank Oz, but really this is Ian McDiarmid’s film, since this is the one that brings Emperor Palpatine out from the shadows and into center stage. Yeah, he’s over the top, but that’s what made him so compelling in Return Of The Jedi. In this film he gets a great scene with Anakin at an opera in which he reveals the history of the evil Sith lords, and the way he lures the doubtful Jedi into the web of deceit is brilliantly understated, even for Star Wars. As the plot unfolds you can see why Anakin becomes Vader; there is a tragic inevitability to it all and you may be surprised to find yourself more emotionally involved in proceedings than you would like to admit. Indeed, this shift in tone and performances makes you care about the characters in the same way as you cared about those in the original trilogy, and will certainly make you think differently about the character of Darth Vader.

Of course the film is not perfect but – and this may come as a blow to some die hard fans of the original trilogy – neither were the first ones. Not even Empire Strikes Back. And there’s the rub.
As mentioned earlier, people go into these new films with preconceived expectations and were subsequently let down. We went to see Episode I expecting to leave with the same sense of wonder when we watched the originals but didn’t. That is most likely because in 1977 nothing like Star Wars had ever been seen on film, but mainly – and this applies to those of us, myself included, who feel most passionately about these films – because we were kids!

If you stop treating Star Wars like the Koran, it’s easy to see The Phantom Menace is a brightly coloured, disposable fun adventure. We may have hated Jar Jar Binks, but in 1999 he was in fact the single most popular star wars character for kids. Lucas aimed it at kids and they lapped it up. Kids weren’t bogged down by the taxation plot device that seems to unnecessarily bother us adults, they saw it for the enjoyable romp that it was.

So it follows, those burned by the first offering went to see Episode II expecting bad acting and dialogue and of course, if you go in expecting that, they will leap out at you, detracting from the great chases, set pieces and fights that were really fun. Similarly those going into this final Star Wars film on the look out for those awkward moments that bothered them so much the last time around will still find them here, albeit much fewer in number, but it’s pretty obvious now that anyone watching a Star Wars film for the acting, plot or script clearly has missed the point of what Star Wars is about.

Yes, Revenge Of The Sith does feature moments of ropey dialogue and the odd line is rather badly delivered but that doesn’t matter. If that bothers you enough to the extent that you fail to see the awesome piece of entertainment on offer here then go and watch Bergman. This is not the film you’re looking for.

If on the other hand you go into this film expecting to be entertained by the frantic action, lavish set pieces and the classical themes that made the original films so memorable – the light saber, the Force, Yoda, space battles, good versus evil – then you won’t be disappointed. Just as Luke needed to release his fear and anger when he went into that rather unconvincing cave, go into your local Odeon without any of the baggage that surrounds the previous prequels and ignore the myth that Star Wars is anything other than entertaining fluff and you’ll have a great time. In short if you strip away all the nostalgia and look at all six film for film, Episode III is almost as good as Empire and better than all the others.