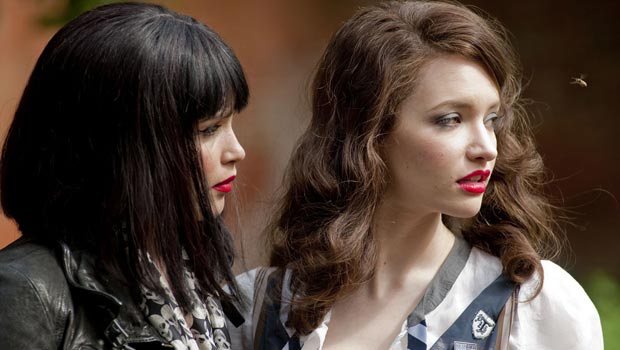 Summary: Comedy and the British film industry only come together successfully on rare occasions these days, and St. Trinian’s is more evidence of a failure to tickle the funny side of cinema.

St. Trinian’s wants to be the coolest new girl at school, but it is so in need of being looked at and impressing everyone there is very little to like about it beyond a heavily made up exterior. Based on the dubiously-dubbed ‘classic’ series of films adapted from the works of cartoonist Ronald Searle, St. Trinian’s is a school for “young ladies” with an anarchic doctrine of free expression. Considered fun examples of learning life at an institution known for its playfully rebellious nature, The Belles of St. Trinian’s in 1954 is highly regarded, but the quality fell away by the time the fifth entry was released in 1980. For this update, rebelliousness is swapped for delinquency as the girls show all the moral fibre of a prison full of serial rapists. Deceiving, thieving and generally showing no respect of authority may be ideal for film where villains can be heroes, but the featured schooling of stereotyping and lessons in the vices gives it all the subtlety of those crude British seaside postcards even with a high profile cast.

St. Trinian’s doesn’t get off to the best start when uptight and wealthy father Carnaby Fritton (Rupert Everett) delivers his daughter Annabelle (Talulah Riley) to the school. Confronted by a twenty something blonde receptionist listening to her iPod and still buzzing from a hedonistic weekend, they have to wake her up so headmistress Miss Fritton (also Everett) can come to greet them. It’s immediately obvious there is going to be no attempt to make the school a place of responsibility as Miss Fritton’s lets the girls can behave how they want. Annabelle is introduced to the different sects such as geeks, chavs and emos, while the lessons are out of control. St. Trinian’s is basically a school of easy to categorise troublemakers who are encouraged to do their worst — hardly an admirable trait.

There are a few amusing moments such as a brutish hockey match against Cheltenham Ladies College, but the plot dissolves into standard children’s television fare as St. Trinian’s ward off the attempt of the new school minister Geoffrey Thwaites (Colin Firth) to close them down while also cheating to get to the final of a University Challenge-style quiz and go about stealing the Vermeer’s Girl With A Pearl Earring to cover the debts that would shut it down. Why anyone would cheer for this St. Trinian’s headed by an overly camp Everett-in-drag and full of posing girls is beyond me.

Typically for a British movie famous faces such as Russell Brand, Stephen Fry, Lily Cole and Girls Aloud make cameos which pander their celebrity persona. Only Gemma Arterton as confident head girl Kelly comes away with any plaudits — a good thing as all eyes will be on her as the new Bond girl in the next Daniel Craig outing due later this year. St. Trinian’s, on the other hand, is not worth gazing at as the humour is ill-judged and far too obvious. Comedy and the British film industry only come together successfully on rare occasions these days, and St. Trinian’s is more evidence of a failure to tickle the funny side of cinema.