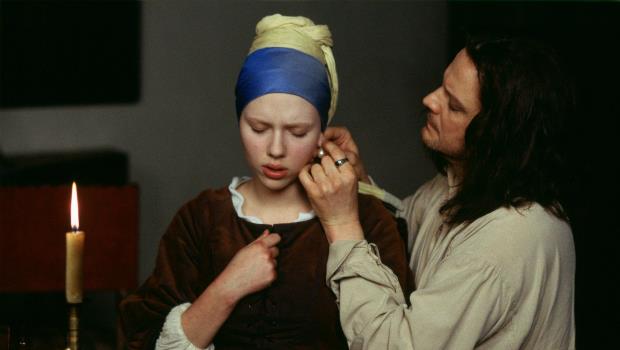 Girl With a Pearl Earring Review

Summary: If you’re looking for something that runs deeper than your average costume drama in both it’s scope and it’s execution then stop and stare at this for a while, you may be surprised at what reveals itself.

With two films opening this week, Scarlett Johansson, star of Girl With A Pearl Earring, looks set to build on the promise shown in a number of eye-catching roles of recent times by maturing into a powerful leading actress. One week into January and she is already one of the faces of 2004; her porcelain features poking out from billboard posters and magazine covers everywhere, her intelligent thoughts leaping off the pages within.

This precocious talent is by far the best thing about Girl With A Pearl Earring; one half of Johansson’s frontal assault on our screens this new year, the other being Sofia Coppola’s Lost In Translation which opened on January 9th. In this tale of desire and obsession she is the unattainable artists’ muse made flesh; drifting elegantly through the dark parlours of 17th century Holland like the Virgin Mary descended into a Rembrandt painting.

Based on Tracy Chevalier’s novel of the same name, Girl With A Pearl Earring uses an accurate historical template to draw a complex fictional account of restrained passion. Set in 17th century Delft, Holland in the studio of artist Jan Vermeer, Johansson’s Griet is the daughter of a Protestant artisan who has fallen on hard times. She is sent out to earn a living as a servant, work that her soft hands at first find difficult, in Vermeer’s household and soon becomes the catalyst that causes the delicate social balance within to unravel. At first intrigued by the unusualness of the painter’s studio, Griet soon finds herself apprentice, confessor and most coveted object in the great artists’ affections as the two build a relationship that threatens Vermeer’s personal and professional life.

A bond forged in mutual fascination and shared interest becomes utterly intertwined with the artist’s creative process. As much as Griet is Vermeer’s muse and the enigmatic subject of the painting that lends the film it’s title, she is his assistant, on hand more often than is reasonably expected to help the painter work. In a number of intimate scenes their union is revealed to be as enigmatic as the expression on the face of the girl in the eponymous painting (dubbed “the Mona Lisa of the northern masters”, not without good reason) and the suggestion of love that can never be fully expressed emerges. Routine aspects of the painter’s preparation suddenly take on a riveting new significance and illicit feelings are betrayed in the most banal of tasks.

With so little occurring on the surface, Girl With A Pearl Earring utilises a strong dose of subtext to maintain a tangible sense of anticipation. This asphyxiating tension manages to immerse the viewer into the story totally. Voyeuristically, the audience is led through cramped, chiaroscuro interiors that, through knowledgeable set design, take in the entire wealth of 17th century Dutch painting. These spaces barely contain a gang of large personalities; all with malevolent designs on Griet, who in contrast appears as pure as white paint freshly squeezed from the tube. An assembly of opposition, personified in the people who orbit Vermeer’s world like satellites without ever managing to land on it, are gathered together to carry the film’s complex range of themes (from jealousy and obsession to the relationship between art and money) with some distinction. Tom Wilkinson plays the sinister merchant Van Ruijven, Vermeer’s patron who covets his work above all others, with just the right mix of charm and malice. Judy Parfitt is the painter’s domineering mother in law from hell Maria, who constantly harasses Vermeer into creating another masterpiece in order to keep the entire household in clogs and Edam. Essie Davis, as the painters’ conceited wife Catherina, finds it unimaginable that he would want to paint a servant in such a vivacious and suggestive light. Her unanswered pleas of: “Why won’t you paint me?!”, occurring in the film’s climactic scene only serve to heighten the feeling that everyone’s prayers ultimately go unanswered.

Girl With A Pearl Earring sloughs itself of the conventional trappings associated with the period drama, and it’s so much more watchable as a result. The over-elaborate scale and ritualistic (sometimes anachronistic) motivations that tend to swamp this genre, and the characters contained therein, is reduced to reveal an effective and moving tale. In preferring to concentrate on a small number of emblematic themes, carried through strong performances, the film succeeds in resonating it’s meaning throughout the ages. A contemporary score and Eduardo Serra’s sublime photography further enhance the film’s vitality.

Girl With A Pearl Earring may not hold everyone’s attention. The stifled passion that runs throughout the narrative may prove a little frustrating at times and Colin Firth overplaying the tortured genius undermines some fantastic performances, but if you’re looking for something that runs deeper than your average costume drama in both it’s scope and it’s execution then stop and stare at this for a while, you may be surprised at what reveals itself.