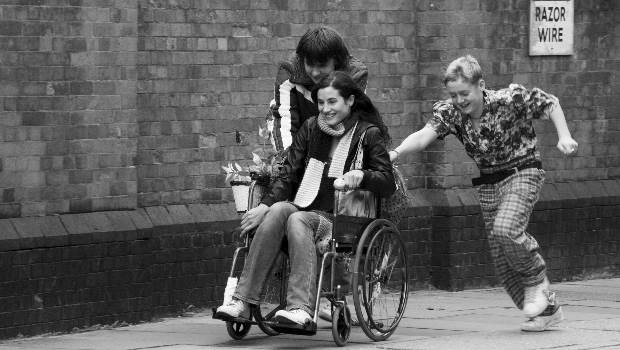 Summary: Essentially, Meadows lets us hang out with these two boys for just over an hour, and it’s an absolute delight.

After the critical recognition and BAFTA success of the intense and powerfully moving This Is England, Shane Meadows’ new film could be seen as a brief aside before his next ‘proper’ movie. At only 70 minutes long, it’s a small story with an air of lightness and improvisation that makes it deceptively throwaway. But while Somers Town lacks the thematic impact of the former film, it is a great achievement in terms of mood and character, and may be Meadows’ most purely cinematic work yet.

True to the director’s form, the setting is recognisably run-of-the-mill, a London where the Gherkin isn’t front and centre but is glimpsed in the distance between cranes and high-rises. But Natasha Braier’s beautiful black and white cinematography immediately informs us that something a little different is going on, alerting us to the possibility that this film may offer a take on life that’s a step away from grim reality. While the opening scenes have a slight air of unease, compounded when homeless Tomo (Thomas Turgoose) is mugged and robbed of all his worldly possessions, it soon becomes clear that Meadows is more interested in portraying an aspect of humanity that offers an escape from this kind of brutality, no matter how hopeless our predicament; pure and simple friendship.

Tomo meets Polish immigrant Marek (Piotr Jagiello), at a loose end while his dad works on a construction site, and after some initial bantering they start to hang out together, ending up doing some work cleaning deckchairs for Marek’s neighbour, a hilarious and kind-hearted Del Boy-esque character called Graham (Perry Benson). Together the boys hatch a plan to woo Maria (Elisa Lesowski), the French waitress working at the local café, and in terms of plot that’s about as complex as Somers Town gets. Essentially, Meadows lets us hang out with these two boys for just over an hour, and it’s an absolute delight.

Turgoose, who made such a sensational debut in This Is England, proves again that he is a natural talent, demonstrating his comic delivery to perfection. It is clear that he and Meadows now have a very natural working relationship, and it will be interesting to watch him develop beyond Meadows’ films; his turn in next month’s horror Eden Lake will hopefully confirm him as a young British actor worth shouting about. Jagiello’s performance as the naïve outsider ably balances Turgoose’s bluster, and as the two of them move from one humorous scenario to the next their natural connection is palpable, and hugely infectious.

A sequence involving the two boys, Maria the waitress and a trip on a wheelchair encapsulates everything that works about this film; it’s beautifully shot, is at once both totally real and too perfect to be true, and it transports you to an ideal world that only exists in cinema but at the same time reminds you that real life could be like that, if you just slowed down and focused back on the most important things. It’s wonderful, and the high point of a lovely little film.