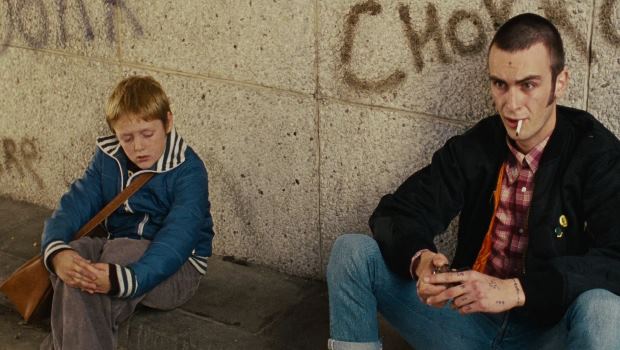 This Is England Review

Summary: Idiosyncratic style and laconic humour is like no other; this is, if nothing else, English film-making.

For all those happy memories I have of the eighties (Fun Boy Three, enormous satin shirts, day-glo, Coal Not Dole, Anti-Apartheid rallies on Clapham Common, Dead or Alive) the fact is that for a lot of people the eighties sucked. The Evil Thatcher was busy sucking the life out of Britain’s last manufacturing industries and sending working class kids to be murdered in the Falklands instead. This is the background of Shane Meadow’s latest film.

Grimsby, 1983, and 12-year old Shaun (Turgoose) sets off for the last day of term (mufti, they called it at my school) in the flares his dead soldier father gave him. Poor Shaun is the target of many taunts (‘you look like Keith Chegwin’s son!’ being one of the most memorable); though he give as good as he gets, the little lad is isolated and, frankly, lonely. On his way home, he meets Woody (Gilgun) and his gang of skinhead mates; expecting more bullying he is surprised when the gang turn out to be friendly and fair-minded. Shaun is delighted to join them in trashing the new housing development; the friendship of these older boys means everything to him.

The gang are not what you might expect; as well as Woody, there’s Milky (Shim) a black gang member; Lol (McClure), Woody’s girlfriend, and Smell (Hanson), a Boy George lookalike with whom Shaun shares his first kiss. Soon Shaun is fully integrated into the gang, proud of his shaved head and his Ben Sherman, docs and braces, and everything seems rosy until Combo (Graham) appears. Woody is thrilled to see him but his pleasure doesn’t last long; Combo has been in prison for three years and in that time has become a member of the NF. This causes a schism within the gang, with Woody on one side and Combo on the other; Shaun, lacking a father figure, is attracted to the older man’s aura of strength, and attends NF meetings, spraying racist graffiti, and robbing Shaun’s corner shop.

It’s this part of the film that many people may have a problem with. Meadows’ agenda is not necessarily to try and rehabilitate skinhead culture, but to remind people that there was more to it than racist thuggery; that the original, 1960’s, skins were into ska, and shaved their heads to be more like their West Indian factory co-workers. Nonetheless, high unemployment, the destruction of traditional industry, and the ‘there is no such thing as society’ attitude of the Tory government left the 1980’s wave of young skins vulnerable to the advances of extremist groups such as the NF. The problem is that Meadows’ wants us to retain sympathy for all the skins, even Combo, and especially Shaun.

Still, for the most part, though it feels like a budget film, This Is England is anchored by heartfelt performances from its young cast, especially newcomer Turgoose who is, frankly astonishing as Shaun, backed by a cast of Meadows’ regulars who acquit themselves well. And Meadows proves that, once again, he can tell a story that combines humour and tragedy, reflecting our lives back at us, like no-one else. His idiosyncratic style and laconic humour is like no other; this is, if nothing else, English film-making…