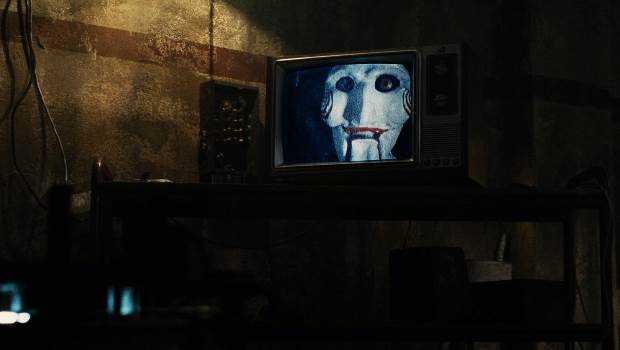 Summary: Saw V is painful viewing for all the wrong reasons.

Once celebrated for delivering an unsettlingly original horror movie, Saw helped kick off the torture porn fetish Hollywood studios have been keen to cash in on. Every Halloween since Saw has returned to the big screen to give us another set of traps which will end in either a grizzly death for its victim, or have them commit an act of unimaginable pain on themselves to escape. All the while, various screenwriters have been trying to riddle the plot with twists and revelations surrounding the mastermind killer John “Jigsaw” Kramer played by Tobin Bell with tiresome results. Saw V sees the series dip to its lowest ebb as the death of Jigsaw reduces Bell’s appearances to flashback and the two central characters of cops on the Jigsaw case chew on the scenery until what feels like the entire Saw legacy is retold, another set of games are played out and a conclusion needs to be found.

Continuing directly from where Saw IV left off, Jigsaw offers his last words of advice to FBI Agent Strahm (Patterson) via his favoured method of communication of a tape recorder. Warned not to delve any deeper into the case, Strahm can’t resist going taking a chance and passing into the back passages of Jigsaw’s warehouse where he is attacked by the sole remaining Jigsaw apprentice, cop Mark Hoffman (Mandylor) who has set everything up to make him look like the hero. But when Strahm escapes a final trap set by Hoffman, he sets about tracing Hoffman’s links with Jigsaw, edging closer to the truth. Meanwhile, a group of five strangers wake up to discover they are part of one of Jigsaw’s games, and must face four typically nasty puzzles to survive.

In Mandylor and Patterson, Saw V has two of the blandest characters to ever grace a horror movie. Both playing deadpan cops and looking eerily similar, they plod around the movie with a frown and laboured delivery which could easily be taken to be there disinterest in the film rather than any stress they are under. Devoid of all emotion, Stahm’s tracking of Hoffman’s involvement in the Jigsaw murders is simply an excuse to revisit earlier entries in the series to fill time rather than look for a new direction. Saw V is basically a recap movie, little more, and this pair have about as much charisma as clip show hosts before Harry Hill’s efforts. Saw fans will be delighted to hear their favourite, Tobin Bell, is back to add weight behind his bid to become an iconic screen character, and fittingly remains the best element of the movie. Saw surely can’t survive without him – and nor does it deserve our time anymore.