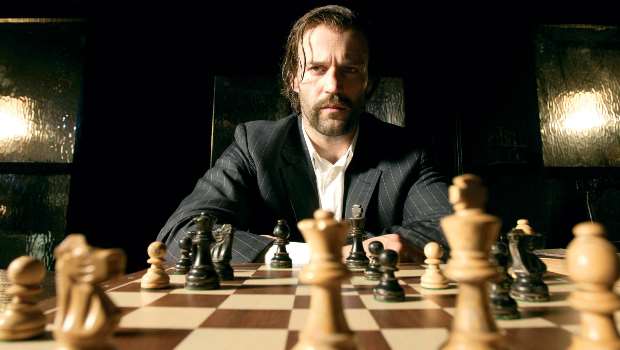 Summary: Simply ingenious, and leaves you gasping for more.

Revolver is the blinding new work from Guy Ritchie, calmly reassuring us he’s back on form and on familiar ground with a steady, comforting, albeit bloody hand, and thankfully minus the missus… With guns, gambling, cursing thick and fast, and plenty of suits. It features long-time Ritchie collaborator Statham as main protagonist Jake Green, a smart-arse cockey gambler and perennial “Winner”.

He’s pretty much barred from all Vegas’ casino’s, his lucky streak on the tables seems to be confined to that – as it doesn’t stretch as far as actually getting him into any establishments. The film tells of the conflict between Green and Liotta’s crime-lord Dorothy Macha. Green not only beats Macha in a private game, but manages to insult the feared casino-owner. Thus follows a ‘hit’ on our lead, though not without a brutal and heady ride.

Cut to Macha in a classy Italian restaurant somewhere in.. London?? spouting smart Ritchie-esque quips, i.e. incisive witty shocks to the [cerebral] system on the quality of the wine. In walks one of his aides, reluctantly relaying the bad news that Green [Statham’s character] has escaped his henchmen. We spy a few mysterious characters in the restaurant including an oriental waitress and a pseudo-intellectual’s apathy at not getting a table. Gunshots.

Blood splattered across a shocked Liotta’s face, as he’s forced to the ground – and kept there by the “help”. Yet only the viewer [and Liotta] can see the mortally wounded oriental waitress lying on the floor, whilst the help are yet to fathom where the danger’s emanating from / what’s just transpired before them. Little do they know that the waitress’ gun is still pointed towards Liotta, and she still isn’t dead. The pseudo sharp-shooter makes haste after shooting her.

Spliced with this are images of triad gang members in a club, a real-life blow up doll licking a lolly, and the bleeding trigger-happy waitress having a last stab at Macha, whilst the “help” mistakenly keep him in line of sight. A serene instrumental heightens the tension and irony of the set-piece. The blitzkrieg of events happening at such a fast pace, with Ritchie’s chopping between images completing parts of the jigsaw unfamiliar just a few seconds back. Simply ingenious, and leaves you gasping for more.

Ritchie, Guns, Liotta – Bring it on…