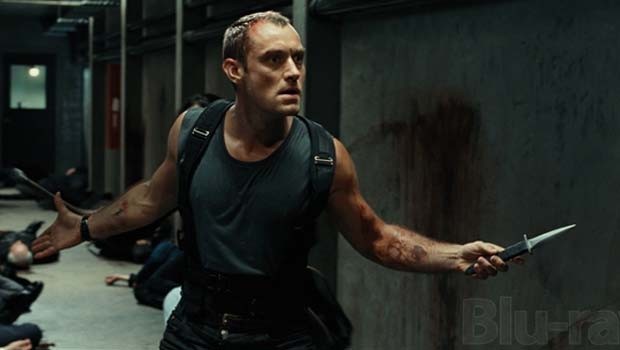 Repo Men (not to be confused with Alex Cox’s Repo Man) is a high concept movie; in the future, a company called ‘The Union’ has discovered a way to make artificial organs that it sells on the open market. Customers no longer have to wait for people to die in order to get a new organ; instead they can sign up for convenient repayment plans, and get the organs they need immediately. The sales team, managed by Frank (Schreiber), are all soft words and ‘you owe it to your family’; what they don’t mention is that if you fail to repay the debt your organs will be forcibly repossessed.

Remy (Law) is a former soldier turned repo man, and one of the best in the business. He and his old buddy Jack (Whittaker) are The Union’s crack team. But Remy’s wife, Carol, is tired of him risking his life and coming home covered in blood, and wants him to go into sales. Unfortunately Remy can’t resist one last job and when it goes wrong, is horrified to wake up in hospital with a state of the art heart and a massive bill. Without the heart he will die, so he reluctantly returns to work, only to find that the job he loved now sickens him. He falls behind on his payments and Carol kicks him out; becoming a fugitive from ‘justice’ he meets Beth (Braga), a sort of bionic woman made up of various legal and black market organs. They fall in love and just want to be left alone, but The Union are never far behind…

Being a fan of dystopian sci-fi, I was determined to give Repo Men a chance, even though it stars Jude Law, who smirks his way through yet another film in what might be described as his Matrix role. Jude has buffed up for the part, and misses no opportunity to do a pull-up, flex a bicep, or give someone a good kicking. He spends quite a lot of time running around in a dirty vest. However, personal antipathy aside, I was prepared to like it – the idea of The Union is clever and paranoid and, in the wake of the banking crisis, the current row over health insurance in the US, and our growing distrust of corporations, timely. However, any company that relied on such a stupid way of reclaiming its goods would rapidly be out of business, while we are never given a sense of what exactly has happened to society that would allow this state of affairs to exist. On the other hand, if The Union are clever enough to create the organs in the first place, why not create them with built-in obsolescence, remote detonation or even simple homing devices?

If the setup demands the willing suspension of disbelief, it does possess some charm. Remy and Jack are ordinary guys, not the brightest, who do an unpleasant job but are just trying to get on with their lives. Killing is, after all, what they trained to do. The film is not very sympathetic towards women; Carol is depicted as a nagging shrew and we never really find out anything about Beth. This is very much a man’s world – there are no Repo Women, and The Union seems to be run and staffed almost entirely by men.

Sadly, the final act, where Jude gets to kick mucho ass, is ridiculous and strains credulity. Watch Blade Runner again instead.