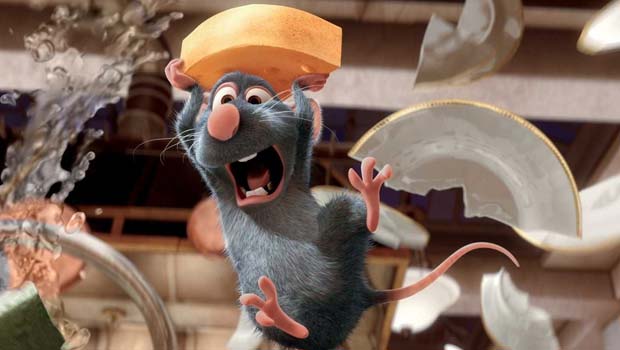 Summary: Ratatouille is touching and moving and very funny.

We all love Pixar. It’s safe to say that no other animation studio, since Disney’s heyday, has succeeded in producing films that are as delightful and well-beloved as pixar, and, most excitingly, with original stories too. Toy Story, Bug’s Life, The Incredibles, Finding Nemo – can they succeed again with Ratatouille?

Bard Bird, the Academy-Award-winning director of The Incredibles, is back in the driving seat and once again he’s steered a clever, funny, touching and original course. With slightly more adult subject matter than some of the other films, its appeal to very young children may be limited – are many kids interested in working in restaurants? – but at its heart its message is simple – friendship, loyalty, being true to yourself.

It’s the story of Remy (Oswalt), a very unusual rat. As we all know rats are horrid, diseased, dirty things that live on garbage. Well not Remy. He could work as a wine buyer, his sense of smell is so advanced, and he dreams, oddly for a rat, of cooking in a gourmet restaurant. Funnily enough his family don’t think much of his ambition and don’t see why he can’t live on rubbish like everyone else, especially as his desire to be around humans, watching them sauté and flambé, gets the family into trouble. And then fate takes a hand – Remy is literally dropped into Gusteau’s. the Parisian restaurant made famous by his culinary hero, Auguste Gusteau, but soon realises that having whiskers and a hairless tail makes you a less than welcome guest in the kitchen.

But Remy finds a friend in Linguni, the shy garbage boy, and with nothing left to lose they form an unlikely partnership, and take Paris by storm, leading to a whole new set of perils and pitfalls.

Pixar have done it again. As with A Bug’s Life, they’ve taken one of those animals we all love to hate and managed to endow it with human qualities that somehow make it charming. Which is worrying because Remy is, after all, a rat. Except of course he’s not really. He’s a young man, and Rataouille is a coming of age story. The rat thing just adds an extra twist. The story is a universal and age of old one of finding yourself, growing up, being true to your dreams, using your talents. As Remy’s cooking turns the world of fine dining on its head, Linguini also has to learn who he is and embrace his heritage.

As usual Pixar have assembled an impressive array of vocal talent including Janeane Garofalo, Brian Dennehy, Ian Holm and Peter O’Toole as Ego, the food critic who with one flick of his pen can close down a restaurant. And they haven’t hesitated to raise the bar even higher on the animation. Showing Paris from Remy’s perspective presents a whole new challenge but is also novel and exciting for the audience; making Remy and his rat buddies look simultaneously real and yet also appealing is another trick these clever clever animators manage to pull off. And the cookery sequences – which manage to make you hungry – are inspired – bubbling sauces, steaming pans, and all the technical apparatus and sense of energy of a professional kitchen where chefs are constantly moving. The scene of Remy being washed down a storm drain is frightening, exhilarating and totally convincing.

Not perhaps on the face of it universally appealing but then nor on the face of it was a film about a lost fish! Pixar have a way with story – and that’s what it comes back to – good stories. Ratatouille is touching and moving and very funny. Bon Appetit!