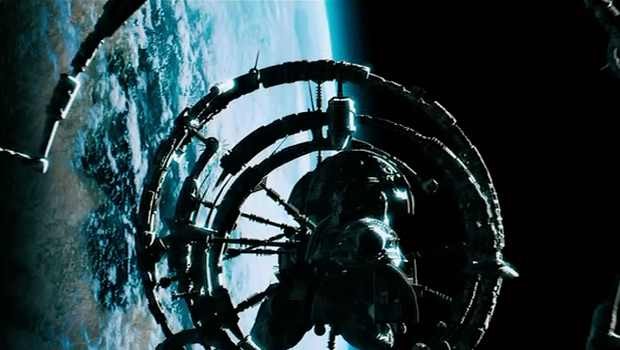 Summary: Pandorum is not great sci-fi by any means, being a bit like The Descent in outer space, but somehow it works.

Pandorum, in case you were wondering, is a sort of deep space psychosis triggered, not unreasonably, by the idea that in space no-one can hear you scream. Its symptoms include hallucinations, trembling, nose bleeds, paranoia, murderous impulses and delusions of grandeur. In other words, you go nuts.

We begin with an ominous list of dates, which tell us that the global population explosion leads to food shortages and general misery. Rather than a Malthusian culling, the powers that be invest in unmanned space exploration, desperately searching for a new world to call home (and presumably, eventually, destroy, like the locusts that we are). They build an enormous Noah’s Ark of a space ship, the Elysium (interesting choice of name…), and fire it towards an inhabitable planet on the far side of the galaxy…

Two astronauts awaken in a seemingly abandoned spaceship; the lights don’t work, they can’t get out of the room they’re, and most terrifying of all they can’t remember anything, disoriented from hypersleep. Bower (Foster) volunteers to leave their chamber, find out what’s happening, and get the power started; Lt Payton (Quaid) stays behind to guide him. Its not long before Bower realises they are not alone; he is being hunted, by something, something not human. Luckily for Bower, he finds help – the ship’s botanist Nadia (Jovovich lookalike Traue) and an agricultural worker Manh (Le) – and after some initial mistrust, they realise there’s safety in numbers and band together to survive. In the meantime, Payton, back in the hyspersleep chamber, is disturbed by a noise, and on going to investigate, discovers a mysterious – and worryingly tense – young man, Corporal Gallo (Gigandet), with his own secrets…

Pandorum is not great sci-fi by any means, being a bit like The Descent in outer space, but somehow it works, managing to pull off two clever twists before the end. Filmed on gloomy and claustrophobic sets, the post-industrial design is familiar but effective. The premise is truly hi-concept and the script unravels slowly, revealing information little by little and taking you along for the ride. Pandorum is not likely to win over any sci-fi doubters, but its a nasty and effective little thriller, despite a less than stellar script (poor Dennis Quaid says little more than ‘come in Bower’ for the first twenty minutes), until the filmmakers make the mistake of trying to explain what’s going on. Unfortunately the explanation is full of holes, and anyway less than interesting.