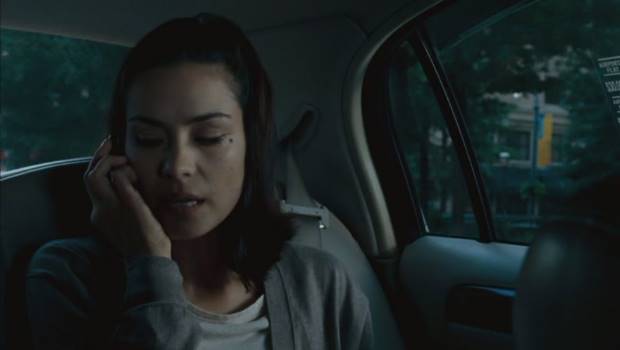 Summary: A bland tedious film with only a few scares.

Every time someone says the horror genre is dead something comes along to revive it. It’s like the bathroom scene in Fatal Attraction; it always pops back up. At the end of the nineties post modernism seemed to spell the end of horror, but the new Asian horror, plus the revival of the genre in Spain and Australia, has bought freshness to a tired formula.

The biggest mark of this success is the remaking of films by Hollywood, always keen to piggyback on someone else’s originality rather than coming up with something new of its own. The Ring, Dark Water, The Pulse, The Grudge: all took excellent and scary Asian films, Americanised them and ruined them (apart from The Ring which is very good and a worthy remake of the original). And now One Missed Call, starring Shannyn Sossamon and Ed Burns. Hmm.

The concept is intriguing: “What will it sound like when you die?” as a chain of people receive terrifying cell phone messages of their own final fatal moments. Though the messages can be deleted, their number is up.

Beth Raymond (Shannyn Sossamon) is traumatized when she witnesses the gruesome deaths of two friends just days apart. Even more disturbing, she knows that both of them had received chilling cell phone messages—actual recordings of their own horrifying last moments. Impossibly, the calls were received days before they died, but each death occurred precisely when and how the messages foretold.

The police think Beth is delusional—except for Detective Jack Andrews (Ed Burns) whose own sister was killed in a freak accident that bears a strange similarity to the deaths of Beth’s friends. Together, Jack and Beth work feverishly to unravel the mystery behind the ominous calls.

But even as they get closer to the truth, Beth’s cell phone begins to ring with an eerie tune, and the readout says One Missed Call…

Maybe The Eye, starring Jessica Alba, will buck the trend.