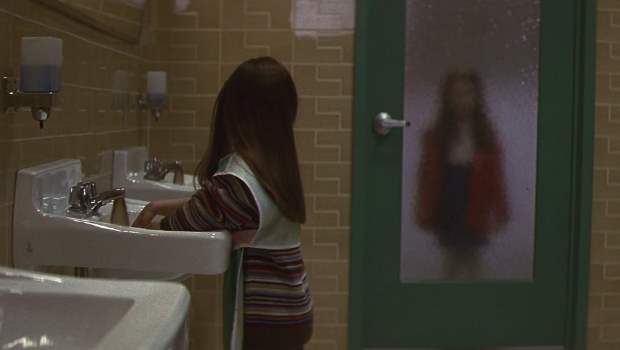 Summary: The only reasons Dark Water isn't getting lower marks are because it is made with competence and because the cast are good value but, other than that, four out of ten is generous.

The time must surely be upon us to close the coffin lid on Asian horror and their American re-imaginings forever, and pray that no amount of ghostly goings on can prise the lid open. Dark Water is the latest in a long line of such films, each progressively less interesting than the last. One sincerely has to hope that this is the end of them, because we’re now getting to the stage where even the originals are no good, never mind the remakes.

Stuck in the middle of a messy divorce and unable to afford an apartment on Manhattan, Dahlia (Connelly) and her young daughter Ceci (Gade) move to the oppressively grim Roosevelt Island, marooned in the East River with its own permanent rain cloud, where housing is as cheap as it is dilapidated. Between the sleazy landlord (Reilly) and the sinister doorman (Postlethwaite), first impressions of the place are not good. Second impressions are even worse, what with the ugly brown leak in the ceiling and the troublesome kids who seem intent on making life hell for everyone. But it’s the best Dahlia can do and the school is good, even is Ceci is having some trouble settling and seems to be spending far too much time with her new imaginary friend. And just why is all this water trying to make its way into their apartment?

Usually the fairest way to evaluate remakes is to view them objectively on their own terms. In this case, even without drawing comparisons to the Japanese original, Dark Water would be considered a disappointment. Next to Hideo Nakata’s masterful tale however, it’s an absolute travesty. I’m all for a bit of intelligence and craft in modern horror – The Blair Witch Project and The Sixth Sense proved how successful a slow burn approach can be, and the farther away we get from braindead teen fare the better. But Dark Water has unfortunately strayed too far in the opposite direction and is no longer a horror at all. What we’re left with is a highly polished domestic drama that is, frankly, a stupefying bore. That’s all very well if you’ve bought a ticket for In The Bedroom, but it comes across as something of a gip if you’re going in expecting some thrills.

Although sticking fairly closely to the basic plot of the Japanese version, a few vital changes have sent this one spiralling down the plug hole. Where the original’s mystery of the missing girl was used to instill a creeping dread and elicit some hefty shocks, at no time does Salles even attempt to have something exciting or scary happen. If you didn’t know it was supposed to be a ghost story, then the first hour or more would give you no clue, so much so that it struck me at one point that maybe there was a reel missing that contained all the good stuff. The second problem (although it’s probably more pandering than bad filmmaking) lies with everything being spelled out in ridiculously simplistic Hollywood terms, leaving no room for suggestion or interpretation.

Connelly deserves credit for making something out of nothing and, while little Gade doesn’t have to do much except be adorable, their mother/daughter bond is easily the film’s most compelling aspect. The unnecessarily starry supporting cast also manage to add some flavour. After his decent but out of place turn in Criminal, Reilly is ideally suited for his role as the conniving landlord and is back at his used-car-salesman-schmuck best. Postlethwaite is saddled with a bizarre accent but is brusquely effective, although Scott is fairly anonymous as Dahlia’s ex. Roth has practically nothing to do but he does it very well, managing to bring a suggestion of something slightly unsavoury to an essentially likeable guy.