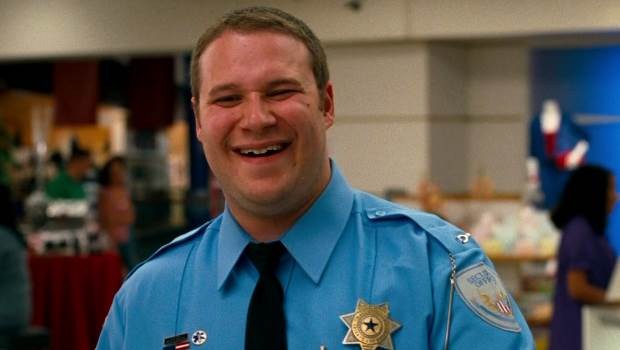 Summary: Often too bizarre for words, you’ve got to admire its moxie.

Observe and Report is going to surprise a lot of people, and not necessarily in a good way. Though it’s often darkly amusing, it would be a mistake to label it as an out and out comedy and what it most certainly is not is a less family friendly version of Paul Blart: Mall Cop.

While it does have an obvious surface similarity, it actually shares more thematically with director Jody Hill’s previous film, the infinitely rougher The Foot Fist Way (that film’s star, Danny McBride, is drafted in for a fun cameo). Like McBride’s Fred in Foot Fist, the main character here, Ronnie (Seth Rogen), is a sad, deluded individual with ideas well above his station.

Ronnie is head of security at a shopping mall and in his head the mall is his ‘Nam as he patrols it with his squad of misfit underlings. Ronnie’s dream in life is to join the police force, so when a flasher starts terrorising the mall patrons, he sees it as his chance to shine, thinking he can offer much more to the investigation than Ray Liotta’s detective.

Like Paul Blart, Ronnie secretly harbours a crush on a colleague, Brandi (Anna Faris). Unlike Paul Blart, he’s a complete idiot and not a very nice guy, so as he pursues Brandi and goes through the early stages of trying to get into the police academy, it makes for painfully embarrassing viewing. For Rogen it’s a major departure from his usual cuddly slob persona and he delivers in spades. Ronnie is so far off the reservation that comparisons to Travis Bickle and Taxi Driver wouldn’t be too beyond the mark.

Hill shows no fear in making the characters unlikeable or uncompromising and takes great delight in reversing many of the stereotypes and clichés that usually infect this sort of film. Liotta is actually a pretty decent cop and Brandi is really quite unappealing, while Ronnie’s alcoholic mother (Celia Weston) is incapable of spouting the usual movie platitudes about never giving up on your dream.

There’s a real anti-movie agenda in Observe and Report’s reality and its honesty. Unlike the disingenuous nature of smut like Napoleon Dynamite, that seeks to make fun of the socially or emotionally deficient, Observe and Report makes it clear from the start that Ronnie is borderline psychotic and simply presents him and everyone around him without asking us to judge them.

Mercifully it doesn’t soften too much in its later stages either, getting progressively darker and more fucked up until you can’t quite believe how far they’ve taken it. And though the final reckoning does smack a little of pandering, and it’s often too bizarre for words, you’ve got to admire its moxie.