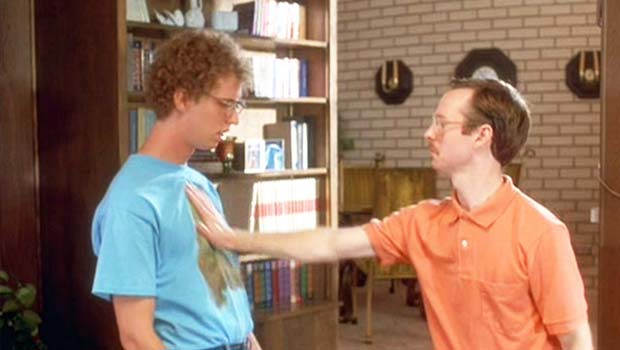 Summary: Napoleon Dynamite will, like I Heart Huckabees and films by Wes Anderson, divide audiences.

Do you like High School movies? I mean American High School movies – She’s All That, Mean Girls, Clueless, Never Been Kissed, American Pie et al – with their weird rituals, cheerleaders, elections and proms, as exotic to us Brits as giraffes once were. We had a sixth form disco at my school, and prefects were chosen by the teachers, while school sports were a matter of indifference with a side of disdain. American High Schools seem so polished and shiny in comparison!

Well, if you like that kind of High School movie, you might not like Napoleon Dynamite. The eponymous hero, product of an unhappy – and frankly weird – home, sports a ginger afro, moon boots, t-shirt tightly tucked into his high-waisted Hammer pants and seventies style glasses, and is the butt of jokes and bullying at school. Napoleon (Heder) is a complete oddball, a slack-jawed yokel wandering around Preston, Idaho with his eyes half closed, who seems to have nothing going for him – apart from a mean game of one-man tether ball.

Not much really happens in this film but it’s an oddly heart-warming character study and will ring bells with anyone who has ever spent any time in a small town. High school student Napoleon lives with his grandmother (a closet dirtbiker) and brother Kip (Ruell), who at 32 still lives at home and is unemployed, spending his days online looking for his soulmate. When grandma (Sandy Martin) is injured in a dirtbike accident, there is no question that Napoleon and Ray can be left alone, and so Uncle Rico (Gries) comes to babysit.

Uncle Rico lives in a trailer and is stuck in the past, reliving his glory days as a football also-ran by videoing himself throwing balls. He sports some classic 80’s fashions and is a bit of an entrepreneur, selling tupperwear and breast enlargement pills door-to-door, and he takes Kip under his wing, leaving Napoleon to feed Tina, the llama, on a bizarre diet of ham and other leftovers.

In the meantime Napoleon has made friends with Pedro (Ramirez), a new student, after spotting Pedro’s mountain bike, and with Deb (Majorino), who is trying to save for college by taking glamour photos. When Pedro is rejected by popular girl Summer (Haylie Duff) he decides to run against her for Student Body President, and Napoleon has to rise the occasion when Pedro is called upon to perform a skit. Can Napoleon help Pedro win the election, get the girl, and sort out his complicated home life?

Napoleon Dynamite will, like I Heart Huckabees and films by Wes Anderson, divide audiences. The comedy is gentle for the most part, a feeling of laughing at life’s weirdness than at jokes that have been set up. Though Napoleon and his friends and family are very odd, we’re not encouraged to laugh at them – well, maybe at Uncle Rico, watching his biceps flex – as much as with them, and we rejoice in their triumphs. Napoleon doesn’t seem to know, or care, that people think he’s weird. He just gets on with life in his own uniquely dead-pan fashion. 24 year old director Hess clearly knows his subject, and has fashioned an affectionate tribute to small-town outsiders.

Stay in your seat and watch the credits. There’s an extra scene which I missed because I didn’t know about it!