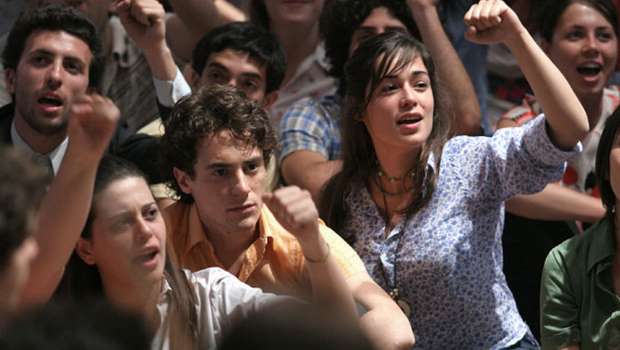 My Brother Is An Only Child Review

Summary: It’s a genial piece that illuminates a forgotten period of history.

Italy. Land of pasta and chianti, laid-back but emotionally expressive and beautifully dressed people, and communists. Oh yes. Have you read The Little World Of Don Camillo?

Italy in the 1960s. Accio (Germano) is a typically annoying teenage boy. Living in the shadow of his handsome, popular brother Manrico (Scamarcio), Accio fights with everyone around him. When they don’t want to fight, he finds a way to make them. He is the despair of his family, who send him to the seminary in the hope that the discipline of training for the priesthood will calm him down. Naturally he is completely unsuited to a life of contemplation, and is soon back home, causing his long-suffering parents even more grief.

Manrico, in the meantime, has left school and started working in the factory that employs most of the local townsfolk. Naturally, like any good Italian worker in the 60s, he becomes a communist, but being charismatic and hunky he rapidly rises through the ranks to become one of the ringleaders and a troublemaker. He also begins dating the beautiful Francesca (Fleri); sibling rivalry rears its ugly head and, as much to be different from his older brother as anything else, Accio becomes a member of the fascist party to the horror of his family. But he’s so argumentative and irritating that even the fascists dislike him.

Daniele Luchetti’s film, based on the novel Il Fasciocomunista by Antonio Pennacchi, is a provocative study of a family trapped in a world still dominated by the shadow of fascism, combining gentle family drama with social commentary to mostly good effect. The years following the end of the war are depicted as a deeply confusing time, with the majority of Italians wanting to cast off the legacy of fascism, and to improve the lot of the working classes at the same tine; the small town in which Accio and Manrico grow up is far from picturesque, in fact it’s literally and figuratively falling apart, while corrupt civil servants keep the keys to the newly built apartments that the families have already paid for. The appeal of communism can be understood against this background, but the film is never too heavy handed; the brothers’ hormones are just as powerful as social injustice and the story never descends into didacticism.

Winner of 5 Donatello Awards, My Brother Is An Only Child was selected for the Un Certain Regard section of last year’s Cannes Film Festival. It’s a genial piece that illuminates a forgotten period of history. Fine performances from Romanzo Criminale’s Germano and Scarmarcio, supported by Alba Rohrwacher as their sister Violetta, make for an entirely believable family dynamic. It’s only really when the story broadens out, in the last act, that it becomes a touch melodramatic.