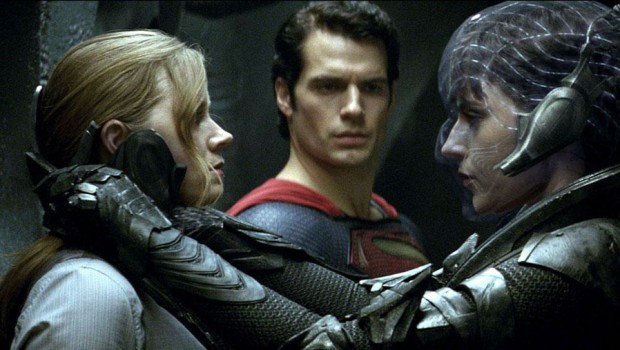 Summary: Visually stunning, this seems all the more an ‘artistic interpretation’ of Superman, steering away from cliché and those tightly packed underpants

After experiencing the original superhero through the lens of the legendary Richard Donner, and whiz-kid Bryan Singer, it’s now Zack Snyder (300, Watchmen) and Christopher Nolan’s (Dark Knight trilogy, Inception) turn to reboot one of our most loved and revered comicbook / movie franchises.

The movie starts with the impending destruction of Krypton, with General Zod (Shannon) deposing the council of elders. Jor-El (Crowe) and his wife are on a mission to send their newborn Kal-El to Earth, with a special ‘genetic key’ as a final bastion of hope for the survival of the Kryptonian race. On Earth Clark is subsequently brought up by his adoptive parents – the Kents, whom help him come to terms with his superhuman abilities in his formative years, and tell him of his alien origin as a teenager. Thus follows much soul-searching, teen angst and the protracted need for discretion in regards to Clark’s amazing powers.

He takes a number of erstwhile jobs whilst coming to terms with his own reality, leading a nomadic, if eventful existence all the while. It’s around this time that he stumbles upon a nether-buried spacecraft from Krypton in the Arctic, which reveals all important answers from his past, as well as an encounter with ardent reporter – Lois Lane (Adams). In accidentally re-activating the ship, they send out a distress beacon, which is followed up by the nascent Zod and crew, setting up another apocalyptic chain of events.

It’s a poisoned chalice of sorts, trying to resurrect one of comic lore and popular culture’s most beloved icons, especially when earlier incarnations have been so successful and wholeheartedly accepted by the public. Nolan and Snyder have somewhat succeeded in kick-starting the franchise with a darker, more serious and layered tone that lies somewhere between the former’s Dark Knight trilogy and the latter’s Watchmen. They’ve done a great job of setting the scene, with great context for what looks to be another series with this phenomenal origin story.

There’s no time for faffing as we cut straight to the chase, and it’s great they have inadvertently tied into the originals; though they have gone back directly to the source material – the original comics. The first instalment in what seems likely to be a trilogy (at the least) lays a great foundation for the movies to come, with great special effects, a fabulous ensemble, but a lot of violence. The running time also had me fidgeting in my seat; inducing an arse-coma of sorts. The stunning visuals and worthy adversaries really herald a Superman for our times, but I did think the Editor could have been a tad more snip-happy.

There were also brilliant performances from all, especially Russell Crowe as Jor-El and Kevin Costner and Diane Lane as Clark’s parents on Earth. Michael Shannon is as scary as always (Boardwalk Empire, Revolutionary Road) but Amy Adams is horrendously mis-cast as Lois Lane. In no way does she evoke the empathy, femininity and vulnerability to make her character believable.

Visually stunning, this seems all the more an ‘artistic interpretation’ of Superman, steering away from cliché and those tightly packed underpants… There’s no cheeky winks to the camera a-la-Christopher Reeve; it’s all very real and to the point. It’s through its humanity and gravity of purpose that the success of the film lies. Despite its excessive running time, and slightly meandering narrative, Man of Steel has definitely earned its place amongst recent comic-book adaptations, standing tall in the DC / Marvel cinematic universe.