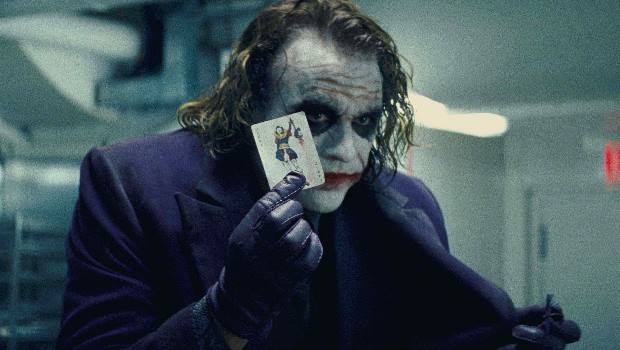 Summary: Freeman, Caine and Oldman provide sterling support. But in the end it’s still Bale’s movie, and he is, simply, perfect.

I think the last time I was this excited about a film was at the screening of Return of the King and that was at a perfectly normal cinema. This is Batman! On IMAX! And as we all know, Christopher Nolan filmed some sequences actually on an IMAX camera to make them EVEN BIGGER! And the opening sequence is one of them and it is HUGE! The audience gasps audibly as Gotham City unfolds before us on a screen roughly the size of a small castle. If – if! What am I saying? When you go and see The Dark Knight, do yourself a favour and watch it on the big screen.

So when we last left Bruce Wayne (Bale), he had fully established himself as Batman, scourge of Gotham’s underworld. Batman hoped to inspire the good people of Gotham to take back their city; instead, sadly, crime has escalated. By taking the fight to the criminals, Batman has provoked a greater response, and some consider that he is doing more harm than good. The police official response is to arrest him on sight; nonetheless Jim Gordon (Oldman), having worked with Batman before, decides to trust him again, and joins forces with him and Harvey Dent (Eckhart), the idealistic, tough young District Attorney to clean up Gotham’s streets once and for all.

They initially experience some success, with Dent greeted by the people of Gotham as their saviour, their white knight, and Bruce begins to wonder if he can retire Batman for good. But then they find themselves prey to a rising criminal mastermind known as The Joker (Ledger). The Joker isn’t motivated by money or power; he simply enjoys chaos and fear, and like a force of nature cannot be bargained with; his complete lack of morality pushes Batman ever closer to crossing the line and breaking his own moral code.

Bruce is also experiencing chaos in his personal life. Though the love of his life, Rachel Dawes (Gyllenhaal), had promised to wait for him, she has begun dating Dent, the all-American hero. While Bruce admires what Harvey is doing for the city, he is jealous of him personally, as he stands in the way of the future Bruce dreams of. Rachel herself is concerned that Bruce is pinning too much on their love, as she is drawn to Harvey. Luckily Bruce still has the ever supportive Alfred (Caine) and Lucius (Freeman) on his side, and he has never needed them more.

So does the Dark Knight live up to the hype?

It certainly does. The best comparison I can make is with The Empire Strikes Back. If you thought Batman Begins was dark, well The Dark Knight is so very much bleaker. In Batman Begins there was a sense that Bruce Wayne was, at least occasionally, enjoying himself, developing his persona as Batman, ‘does it come in black’? and taking pleasure in upsetting Gotham’s criminal apple cart. This time around – ‘why so serious?’ – the stakes are higher, the feeling much more adult, and there is a real sense of impending doom. Batman is loathed as much as he’s admired, seen as a freak by many of the people of Gotham, and The Joker cunningly picks on this vulnerability. The Joker is a very good judge of people – he totally gets under Dent’s skin and knows exactly how and when to twist the knife. For a madman, he is extremely astute and, worryingly, he’s also funny.

There’s been some talk of a posthumous Oscar for Heath Ledger; I’m not sure his performance is that good but nevertheless it is a new and possibly definitive Joker that he brings to the screen, with his terrifyingly scarred face and weird smeary make up, his tongue flickering in and out like a serpent’s. It’s very sad to see him on screen and know that we won’t see him again, when he was really just beginning to stretch himself as an actor. The other performances are equally compelling; I especially liked the replacement of Katie Holmes with Maggie Gyllenhaal, who brings her warmth and simple air of loveliness to the role. She elevates the film, as does Eckhart, who in many ways goes through the most disturbing story arc when tragedy strikes, proving that even the most decent men have another side. Freeman, Caine and Oldman provide sterling support. But in the end it’s still Bale’s movie, and he is, simply, perfect. Bring on part three.

Christian Bale inerview- About Harsh Times and The Dark Knight