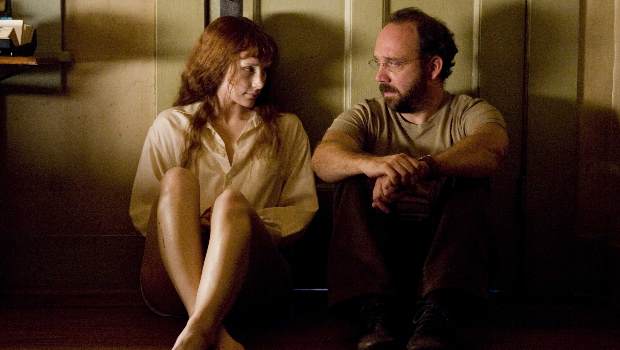 Lady In The Water Review

Summary: A crying shame that such a talented bunch of people couldn’t have come together to work on a different project.

Children are often told that if they hold a shell to their ear then they will be able to hear the sea. No such apparatus is required to hear The Lady in the Water groaning under the weight of its own post modernism.

In Manoj Night Shyamalan’s new film Cleveland, a building superintendent played by Paul Giamatti, has his life saved by a strange young woman called Story. He comes to believe that she is a “narf”, a water nymph from Chinese mythology. (Luckily, there’s a old Chinese woman in the building who, though unable to speak English, can tell Cleveland the tale piece by piece with the help of her lithe young daughter).

Story is prevented from making her way home to the “blue world” (aka the ocean) because of a wolf-like creature known as a “snarl” which hides in the grass waiting to kill her. Cleveland enlists the help of many of those who live in the apartment complex in order to get Story past this nasty beast. Each must fulfill certain roles set down by the myth of the “narfs” in order for Story to safely leave the land.

As I mentioned earlier, the post-modernism at work in The Lady in the Water is particularly galling, and somewhat out of place in a film which started life as a bedtime story for Shyamalan’s children. For instance, one of the residents is a newspaper critic who, like Jamie Kennedy in Scream, can identify the type of characters that are needed to move the plot of the film along. He thankfully gets his comeuppance when he attempts to use the rules of the horror genre to safely navigate his way out of tricky situation with the snarl.

And if this isn’t enough to get your goat up, just remember that the female lead is called Story.

But that’s not to say there aren’t other fundamental problems with the film, such as the overabundance of characters who serve little or no purpose in developing the plot. Again, this is obviously part of the film’s post-modern approach, but I can’t help but think that Shyamalan would have been better off including only a handful of these in order to give talented actors like Bob Balaban, who plays the film critic, and Freddy Rodriguez who appears as the unlikely saviour Reggie, the chance to properly develop their roles. In fact, the most positive thing I can say about The Lady in the Water is that it’s a crying shame that such a talented bunch of people couldn’t have come together to work on a different project.

Oh, in case you didn’t know, what you actually hear when you put a shell to your ear isn’t the sea; rather it is just the ambient noise around you being reflected off a very smooth surface. If you’re looking for a fun activity to fill a couple of hours, I would suggest you do this rather than watch The Lady in the Water.