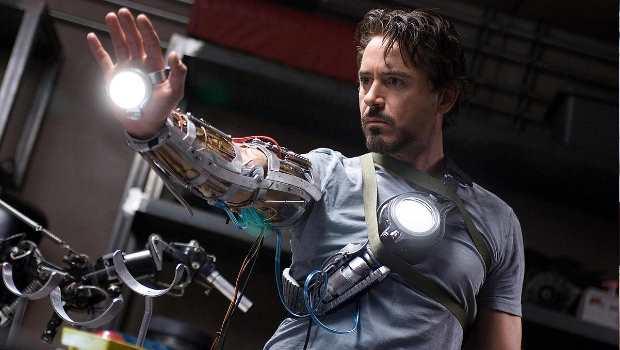 Summary: If this is a taster for something even more impressive in the sequel touted for 2010, there is already a reason to get excited as the more we see of Downey, Jr. as Tony Stark, the better.

When the boy get busy with his toy in Iron Man, there’s that glint in his eye to suggest he’s going to have fun and we’re going to enjoy watching. Seeing a man in high-tech body armour smash his way through terrorist armies and fly faster than air force jets ensures this movie debut to the Marvel comic character is effortlessly cool. But when the action slows to plot pace, which it frequently does, Iron Man wouldn’t be half as much fun without Robert Downey, Jr. putting on a display as one of the most irresistibly charming and charismatic superheroes ever. Only drifting into a moment of self-loathing, his depiction of playboy advanced weapons expert Tony Stark brings out the child in him as he creates a series of increasingly-enhanced bullet-proof suits to wipe out the bad guys. Without him, the countless workshop montages and drawn-out plotting couldn’t hope to retain the fleeting moments of boys’ own action.

For the uninitiated, Tony Stark is another of comic maestro Stan Lee’s creations. A child genius who inherits his father’s weapons-building business Stark Industries and has appeared on the cover of countless magazines, he has become a major celebrity in the US for supplying the arms to defeat America’s foes. Living an incredibly rich life in a cliff-top home and women throwing themselves at him, his life is changed when he is ambushed by terrorists after a demonstration of his devastating new missile called Jericho in Afghanistan. Kept alive only by a battery-powered electro-magnet stopping shards from his own missile reaching his heart, his captives order him to build a replica of Jericho from spare parts. Withhold your disbelief as, lucky for Stark, not only does he create a power source that fits into a chest cavity from the scraps, he also constructs a suit of armour to break out to freedom. Found in the desert by the army he vows to stop the production of weapons at Stark Industries and sets about making a new model of his armour and get vengeance — however he will also face a threat far closer to home.

Robert Downey, Jr. might not seem the first choice for a superhero movie, however Iron Man would simply have flopped without him. His past battles with drugs and alcohol draw comparisons with Stark’s lifestyle at the start of the film and the need to do good on his return from Afghanistan. The glib remarks about himself and playful one-liners as he fouls up in his workshop trying to make himself fly couldn’t have been delivered any better, while in the suit his gleaming eyes give the impression he really is out-manoeuvring fighter planes. The supporting cast of Gwyneth Paltrow as his assistant Pepper Potts, Terrence Howard as best friend and military contact Lt. Colonel James Rhodes and Jeff Bridges as business partner Obadiah Stane are solid but Downey, Jr. takes centre stage like a circus ringmaster to bring the best from them while keeping focus on himself.

Yet Iron Man still fails to satisfy fully. The few key action scenes are spaced too far apart and over all too quickly to feel fully immersive, especially given the length of the construction sequences between them. Yes the suits fly, shoot rockets, fire flares, shoot mini-guns and generally cause destruction, however films such as Transformers gave us more action in one sequence than this does in the entire 126 minute running time. Another niggle is that although there are real political references such as America supplying arms to its now enemies, at times outrageous leaps in realism are taken such as Stark assembling his first Iron Man costume when he is ordered to build a missile while under constant CCTV surveillance. I know it’s a comic book film, but even a five year old could tell he was up to something underhand.

Still, to its credit, Iron Man has set the benchmark for 2008’s blockbuster season early and, as superhero movies go, Robert Downey, Jr. has proved the phrase “oozing charisma” can be applied to the normal identities of on-screen superheroes. If this is a taster for something even more impressive in the sequel touted for 2010, there is already a reason to get excited as the more we see of Downey, Jr. as Tony Stark, the better.