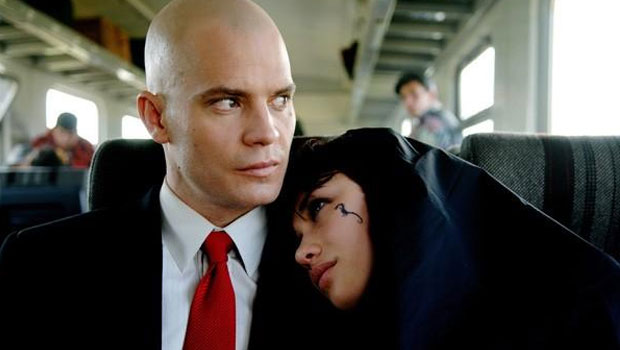 Summary: Kurylenko provides eye candy for the lads to pass a small portion of the 95 minute running time, but even a sex-starved gamer will struggle to find that appealing when they’re wishing they could be playing Hitman rather than bored by it.

Get the sniper rifles out, Hitman deserves to be taken out by a rash of bullets to the head as videogame-to-movie adaptations sink to a new low. After the bad-mouthed gunfest of Shoot ‘Em Up wracked up a body count big enough for a city-sized morgue with loose plotting poking fun at the titular game genre, Hitman is a laughable effort at the serious approach. If giving the central, wanted assassin the distinctive features of a black suit, red tie and bald head with a barcode clearly visible in a crowd of people isn’t ridiculous enough, every other feature is dumbed down to nursery school level. It’s a sorry state of affairs for star Timothy Olyphant who again fails to light up the screen following his weak performance in Die Hard 4.0.

The story follows the typical double cross scenario. Agent 47 (Olyphant) is one of an elite set of hitmen working for an organisation seemingly set up to provide killing services. When ordered to take out Russian leader Mikhail Belicoff (Ulrich Thomsen), he becomes embroiled in a conspiracy with Interpol and the Russian FSB on his tail. When he isn’t shooting holes in everyone he meets or evading pursuit from detective Mike Whittier (Scott) and his assistant Jenkins (Offei), there’s the small matter of the gorgeous Nika (Kurylenko) to protect as she could hold the key to his survival.

For a game about killing people, there is a remarkable absence of any action in the first half of Hitman. It’s more an excuse for Olyphant to speak to his talking laptop, use his sniper rifle and look menacingly cool in his smart suit. The plot development takes second place to showing off how he can do everything effectively while the Russians and Interpol argue over who is leading their investigation. When Nika shows up, it isn’t clear exactly why she has to be kidnapped by Agent 47, nor how he can get away with constantly bundling her into a car while shouting and screaming without repercussion. But this is exactly why Hitman is so shallow: it exists in it’s own, isolated world and as the action attempts to hot up, it’s believability freezes completely.

The Bourne series won kudos for its attention to detail and use of real locations filled with real people. Whenever Agent 47 needs to fight villains in a crowded space, there is a handy back room. If he is surrounded by people with guns, no one even bothers to raise a weapon until he has them in his sights. Even his blatantly obvious motifs of a barcode tattooed on his shaved head is only recognisable when writer Skip Woods needs it to be so he can introduce a bit of tension. With such a forced series of set pieces, the contrived finale is unsurprisingly reliant on too many unlikely outcomes.

Woods, who hasn’t had a major script produced since the all style, no substance Swordfish, brings in lots of statements of intent from the central characters, but no realistic way of achieving them. Too often the solution is to jump to the point Agent 47 has already broken into a building or found out a top secret piece of information without the method to provide any suspense. In the second half of the film, it leaves French director Xavier Gens with only a series of shoot outs that hardly compare to recent all-action crowd pleasers such as Jason Statham’s vehicles The Transporter or Crank. Olyphant struggles to compete with the buff and brutal Statham, relying on an unconvincing icy glare to see him through. Kurylenko provides eye candy for the lads to pass a small portion of the 95 minute running time, but even a sex-starved gamer will struggle to find that appealing when they’re wishing they could be playing Hitman rather than bored by it.