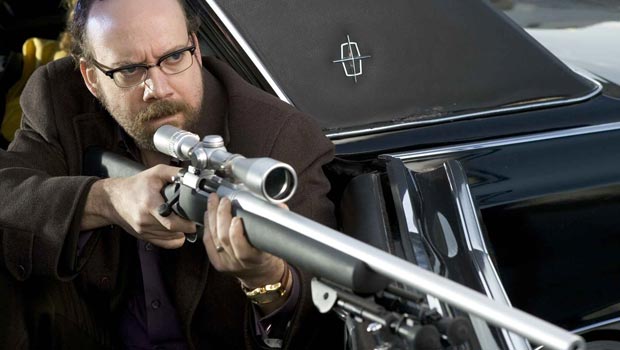 Summary: This is lads-orientated entertainment unlikely to hold your attention past an initial, murderous adrenalin rush.

Naming a film after a videogame genre is a novel idea, except it indicates the shallowness of the enjoyment on offer. To the non-gamers out there, the term “Shoot ‘em up” is used to define games in which players have to kill everything on screen before it kills them. Be it people, vehicles or aliens, they all have to die somehow, plot normally takes second place to ensuring there are endless hoards of baddies to be despatched. Shoot ‘Em Up is an accurate movie portrayal of said genre. Wave after wave of men with guns are shot dead by sharpshooter Mr. Smith (Owen) to the annoyance of their boss Mr. Hurtz (Giamatti). Fuelled by a paper thin plot about gun control that isn’t as ironic as it sounds, this isn’t even James Bond for dummies: it’s Bond for the Nuts and Zoo generation.

Owen’s Mr Smith, who we meet slurping on a coffee and munching on a carrot, wears a Matrix-style leather jacket and a continual deadbeat expression. Sitting on a street bench, he sees a pregnant woman about to give birth being pursued into a warehouse by a gun-totting stranger. Taking matters into his own hands, Smith shoots the man then deals with dozens of other hitmen while protecting the woman who gives birth at the same time. After eradicating them, he fires a bullet though the umbilical cord as if he regularly delivers babies in the middle of gunfights. This is the jumpstart of an action film that has no sense of self-respect. Later on, Smith enlists the help of a prostitute (Bellucci) who he manages to have sex with while fending off another gang with murderous intentions, becomes embroiled in a skydive shoot out and frequently uses an endless supply of carrots as weapons. It really is like watching a videogame with its childish sense of humour and wall-to-wall gunfire, only you don’t get to partake in the bloodshed. So where’s the fun in that?

Well, it’s limited. Impossible to take seriously, Owen hams it up as the gruff, no-nonsense hero with wisecracks not suitable for a 12A Bond flick. His crass attitude is not helped by Giamatti’s painfully off-key performance as the comic-book style villain on his tail. Mr. Hutrz’s fondling of a dead woman’s breast and constant calls to his wife are supposed to be tongue-in-cheek moments of character development, but fail miserably with Giamatti over-emphasising every word he utters. Bellucci follows Mr Smith around looking pretty, hardly a difficult job for her, and gets in on some dirty behaviour in an alley. It makes for a tough set of people to want to watch for much longer than is strictly necessary.

There is a degree of tenacity to writer/director Michael Davis making a film so one-dimensional he can only have pitched it to studio bosses as being “Clive Owen shoots people for 80 minutes”. On that front, he delivers fast-paced and inventive action sequences. It’s just a shame that you can’t feel the same level of enjoyment as you could get from loading up a game of Medal of Honour or Half-Life and shooting at your mates online while swearing and making rude sexual jokes to them down a microphone. If that sounds fun but you can’t do it at home, Shoot ‘Em Up just about does the job. Otherwise, this is lads-orientated entertainment unlikely to hold your attention past an initial, murderous adrenalin rush. I was looking forward to this as Owen’s major step into action hero territory. Perhaps he’s better off looking for more serious material such as Gosford Park or Children of Men that really gave him a chance to flex his considerable acting muscles.