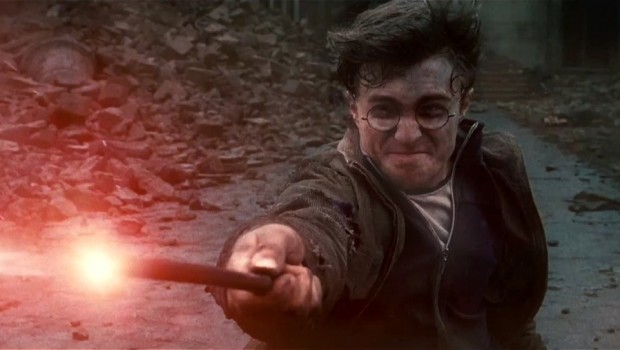 Summary: The most satisfying and enjoyable film of the series so far.

Well, this is it – almost. How many years has it been? We’ve watched Harry (Radcliffe) since he was a gangly eleven year old, first discovering the magical world that was his legacy. And what a legacy! Not just any boy wizard, but The Chosen One, destined to save the world. Still, between battling possessed teachers and giant snakes, Harry always found time for a game of Quidditch and a laugh with his friends Ron (Grint) and Hermione (Watson). But at the end of Harry Potter and the Half-Blood Prince, the game changed. With the death of Professor Dumbledore (Michael Gambon) Harry was left without his mentor, his only instruction to find and destroy the horcruxes into which the evil Lord Voldemort (Fiennes) had placed parts of his soul.

After a thrilling opening, an action packed dog fight between the Order of the Phoenix and the Death Eaters, we are in romantic territory (and room for a breather) with the wedding of Fleur Delacour (Clemence Poesy) and Bill Weasley (Domhnall Gleeson). But this idyll is all too brief – the Ministry has fallen and Voldemort has declared himself openly, though ruling through a puppet government. Harry is declared an enemy of the state and he, Ron and Hermione go on the run, having managed to find one of the horcruxes. There follows one of the least successful sequences in the source novel; the endless descriptions of how cold and boring camping is when you don’t have any money for food. The three friends, left only cryptic clues by Dumbledore, and under the malevolent influence of the horcrux, quarrel and snipe constantly. In the book this is dull, but works surprisingly well in the film, bringing Ron’s long suppressed feelings for Hermione and jealousy of Harry to the fore.

Harry is still mysteriously linked to Voldemort, and begins, with Hermione’s help, to piece together the clues. They discover the legend of the Deathly Hallows (told in a lovely bit of animation), three items that together make a wizard invincible: the Elder Wand, the Invisibility Cloak, and the Resurrection Stone. Harry realises that Voldemort is looking for the wand, having discovered that his and Harry’s wands were connected in Harry Potter and the Goblet of Fire; neither can deal a killing blow. With the Elder Wand, Voldemort will be invincible; no wizard would be able to stand against him. Harry decides that they must find the Hallows, if only the Death Eaters don’t find him first…

Harry Potter and the Deathly Hallows Part One is perhaps the most satisfying and enjoyable film of the series so far. Gone is the slightly redundant Hogwartsian setting with the trivia of house cups, quidditch matches and detentions. Harry, Ron and Hermione have been thrust into the adult world with a harsh abruptness that is bought sharply home in a scene of a lonely Hermione walking away from her family home after magically eradicating all evidence of her existence and wiping her parents’ memories for their own safety. The opening battle, with real casualties, is vivid and exciting, and subsequent action sequences are no less dramatic. David Yates has a sure grasp of his material, and the three leads now inhabit their roles fully. Gone are the Childrens’ Film Foundation performances; all have raised their game, but perhaps most noticeably Grint, no longer just the comic foil.

As usual, sadly, the density of the plotting and the sheer amount of story means that many of the vast ensemble cast are reduced to little more than cameos. Voldemort is mostly seen in Harry’s visions, while Snape (Rickman), Lupin (Thewlis), and Mr and Mrs Weasley (Mark Williams and Walters) have only a few lines each. Interestingly, now that Snape is an acknowledged Death Eater, he seems to have started using shampoo; he almost looks as if he’s had a perm. It’s good to see Jason Isaacs back as Lucius Malfoy, much humbled after his stay in Azkhaban, while Helena Bonham Carter, still channelling Amy Winehouse but again with glossy, thick hair, chews the scenery magnificently as the whole picnic short of a picnic Bellatrix Lestrange. Bill Nighy and Rhys Ifans join the cast, which also sees the return of house elves Kreacher and Dobby in key roles.

The film was originally intended to be 3D but doesn’t suffer from the traditional presentation. I for one can’t wait for next July.