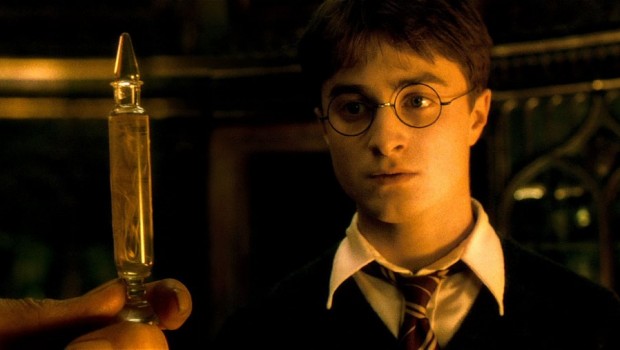 Anyone who has been reading this site over the years will know that I am a big fan of the Harry Potter franchise, both books and films, and was very much looking forward to this latest in the series. So, where were we? The Ministry of Magic was forced to admit that Lord Voldemort (Fiennes) had returned and Harry right all along, but only after a mass breakout from Azkaban prison and the tragic death of Sirius Black (Gary Oldman), Harry’s godfather. As usual, we join Harry (Radcliffe) in Little Whinging, where he is waiting for Professor Dumbledore (Gambon) to take him back to Hogwarts. Dumbledore explains that he has a special task for Harry in his sixth year at school, and the first part of it is to persuade a former teacher, Professor Slughorn (Broadbent), out of retirement.

Slughorn was once Tom Riddle’s teacher and, as Dumbledore explains, the key to understanding how to destroy the Dark Lord. Meanwhile, a very different adversary is attacking the students; hormones. Harry’s feelings for Ginny Weasley (Bonnie Wright) are growing, but he’s hampered by her boyfriend Dean Thomas, not to mention her brother Ron (Grint), who has problems of his own. Lavender Brown, another student in their year, falls madly for ‘Won-Won’, leaving Hermione seething with jealous rage yet unable to express her feelings.

Oddly, Harry’s nemesis in previous years, Draco Malfo (Tom Felton) is the one student who seems above it all. Harry, Ron and Hermione (Watson) know he’s up to something, but what? Professor Snape (Rickman) seems to be involved, but while Dumbledore insists that Snape can be trusted, Harry can’t act on his suspicions.

David Yates, so successful in taming the bloated Order of the Phoenix, is on shakier ground here. The film begins well, with dark wizards wreaking havoc in our world; the spectacular destruction of the Millenium Bridge is inspired. He and writer Steve Kloves also dare to go where no Potter director has gone before, creating completely new scenes not envisaged or described by J K Rowling. The young cast, especially Watson, acquit themselves admirably; Broadbent is a nice addition to the teaching staff as the snobbish, greedy Slughorn. So why did I come away disappointed?
As the series goes on and gets darker, the tone becomes more inconsistent; the humour that Rowling is so famous for – and does so well – seems inappropriate when lives are, literally at stake. Similarly the details of life at Hogwarts, so charming in years 1 – 3, seem out of place here – why do we need to see Quidditch tryouts and another boring match? With a running time of nearly 2.5 hours, it feels like a lot of filler could have been pruned in order to concentrate on the essentials – Harry’s quest to defeat Lord Voldemort.

His absence from the film is another problem; though we see him at eleven and again at sixteen (played by Hero Tiffin Fiennes and Frank Dillane respectively), his place is filled by Bellatrix Lestrange (Bonham Carter), more like Amy Winehouse than ever. Another problem is that, with such a lot of plot to get through, many of the returning characters are short-changed. Lupin (Thewlis) and Tonks’(Natalia Tena) relationship is hinted at but given very little screen time, and with a two year gap since the last film many people may not even know who Tonks is. Similarly, devastating events take place, but are never given room to create their full emotional impact as we rush on to the next scene.

Yates only scores an A for Acceptable here; must try harder next time.