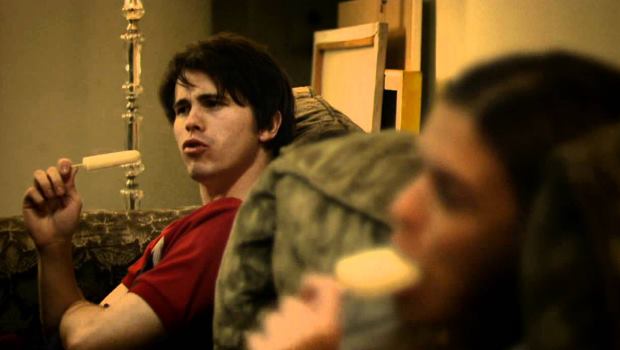 It is a truth universally acknowledged that, with romantic comedies, the realism of the situations portrayed is in reverse ratio to the budget and star names attached. Much like In Search Of A Midnight Kiss, Good Dick – and don’t let the title put you off – is an ultra low-budget indie flick with no cast attached and a corresponding verisimilitude that took me by surprise.

Jason Ritter – the two leads are unnamed – is a lonely young man working as a clerk in a independent video store. His life is the opposite of the American Dream; he has a job, but lives in his car, and his entire life revolves around the couple of blocks near the shop, and his friends who all also work there. And one woman, with whom he is obsessed.

She is a mysterious soul. She comes to the video store every day to rent 80’s soft core porn. She doesn’t speak or really engage with anyone, and he is fascinated. One day he attempts to engage her in conversation, suggesting that she not waste her money on one of the films she’s picked; she barely registers his interest, but allows him to remove the offending film from her stash. And this minimal interaction is enough; love blossoms in our hero, and he is determined to pursue her by any means possible. Stealing her details from the store’s database, he finagles his way into her apartment by telling her that his great aunt, who supposedly lives in the building, has died. Sympathy – or good manners – win the day and she lets him in.

Good Dick reminded me of The Secretary; two complete oddballs find love because of course there is someone out there for everyone, even if they are barking mad and very odd. Of course, she is like this for a reason, and though we never find out exactly what has happened to her, he is the catalyst that brings her out of her depression and makes her capable of growth. Ah, the power of love.