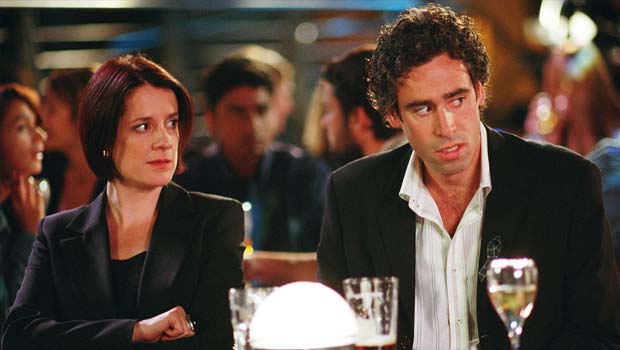 Summary: Very funny, rude, and sexy, and it made me want to jump on a train in August and head for the border.

Festivals are a strange phenomenon: a liminal space, where normal rules are suspended and anything goes, inheritors of the medieval concept of high days and holidays where the King becomes a beggar and the beggar a king. Nowhere is this more true than Edinburgh, where for the month of August this most Presbyterian city and financial centre becomes home to over a million visitors, converging for the world’s largest arts festival. Comedians, actors, mime artists, dancers and filmmakers all desperate to make their names, and the audiences hoping to spot the next big thing.

A bus pulls up in the busy centre of Edinburgh and disgorges its passengers, including Faith (Marshal), a tiny Pre-Raphaelite beauty. Though burdened with the world’s biggest rucksack, she wastes no time handing out flyers for her one woman show, though when she gets to the theatre she is disappointed to be told by Brother Mike (Russell), who runs the venue, that her show has been moved to a graveyard slot. Brother Mike, a Franciscan friar, has a one man show of his own and the two immediately bond. Across town, wealthy Micheline (Bullmore), a young mum suffering from post-natal depression, rents her luxurious flat to an experimental theatre group from Canada, and finds herself drawn to their Bohemian lifestyle.

Britain’s favourite TV comedian, Sean Sullivan (Mangan), is grudgingly attending the festival as a judge at the comedy awards; he’s really there to schmooze an American agent, but he’s not averse to a little extra-curricular festival fun with ambitious comedienne Nicky (Punch) – the fact that she is in the competition matters not a jot. Petra (Cassidy), Sean’s long-suffering and put-upon assistant, just sighs and tries to minimise the damage. Another competitor for the comedy awards is Tommy O’Dwyer (O’Dowd); desperate to win on this, his tenth trip to Edinburgh, he determines to use his wit and Irish charm to seduce journalist and jury member Joan Gerard (Nardini)…

Festival, written and directed by Annie Griffin (creator of Channel 4’s The Book Group) is an Altman-esque, blackly comic and very adult look at the hopes, dreams and fears of festival-goers, meandering through the lives of ten very different protagonists. Griffin, herself a former actress and a formidable comic writer, clearly knows her material and absolutely nails the nervy egocentricity, insecurity and pretentions of performers, here ratcheted up still further by the chaos and opportunities of Edinburgh.

There are, loosely, two intertwining threads: the actors including Faith, Brother Mike and the Canadians/Micheline, and the comedy awards. The comedians’ storyline is more successful; the Canadians’ slightly ludicrous undergraduate behaviour is a little too irritatingly realistic, or maybe it’s just that I generally prefer drunken, shag-happy comedians to practitioners of Tai Chi. But it’s in the little details that the film works – the lighting technicians who think its all, really, about them; the horror on a performer’s face when they realise their play lacks … something… what they do not know, but someone else’s work is better, more moving, funnier.

Griffin seems particularly interested in exploring the idea of humour, using humour to critique itself – we don’t normally interrogate humour, even though it’s central to the British way of life and we pride ourselves on it, we don’t really ask why something is funny. She also looks at, through the character of Sean Sullivan, the way that talented people can so easily become monstrous – Sean is deferred to by everyone, he is a genius, so he is allowed to behave exactly as he likes. Petra hates him and yet needs to be needed by him – his uselessness allows her to be important, and without him she is lost.

Anyone who saw The Book Group will know that Griffin’s humour is always tinged with sadness and Festival is no exception. Brother Mike’s one man show explores his own demons, but provides no answers, no catharsis; Petra cannot break away from Sean; Micheline longs for another life. But it is also very funny, rude, and sexy, and it made me want to jump on a train in August and head for the border.