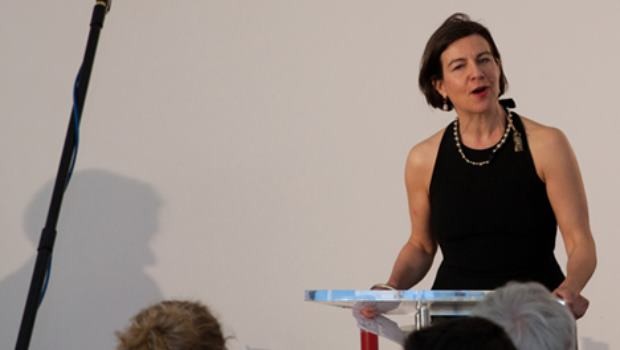 It’s the largest arts festival in the world and overruns Scotland’s capital for the better part of a month. But the Edinburgh Festival, with all its noise and pomp, alcohol and cabaret, countless careers built and destroyed in the space of a review, has practically never featured on celluloid.

“Edinburgh is the most incredible looking city and yet you never see it on film,” confirms writer-director Annie Griffin, whose black comedy, Festival, is about to change all that.

“In all my years of living here I’ve noticed this obsession and fascination with American culture,” the Buffalo, New York native explains. ”But to me, the Edinburgh Festival is much more glamorous than, say, being on Broadway. One million people head to Edinburgh during August.”

With a hand-held, almost documentary style, much of Festival was shot during last year’s event, with actors playing comedians appearing alongside genuine stand-ups, all set against a backdrop of street entertainers and the real crowds. Interweaving a series of stories, the ensemble cast and improvised scenes deliberately recall Robert Altman’s classic country music panorama, Nashville.

There’s Sean Sullivan, an egotistical stand-up and comedy award judge who sleeps with one of the contenders; Joan Gerard, a jaded BBC Scotland journalist and judge who sleeps with another comic in the running; a repressed, post-natally depressed mother renting out her flat to a group of performers who is drawn to their lifestyle; and in one church venue alone, an earnest Fringe newcomer presenting a one-woman show on Dorothy Wordsworth, a trio of avant-garde Canadian actors and the towering Brother Mike, performing a play about paedophilic priests that’s a little too close to reality for his precarious mental state.

“With a lot of shows you see in Edinburgh, you really feel the performer should be speaking to a therapist not an audience,” observes Griffin.

So there’s a veracity to the narrative, but also, and perhaps unexpectedly for something that cost £1.8million and had the full backing of the city council, a playful, anarchic edge that Griffin maintains is entirely appropriate.

“One of the ironic things is that the festival takes place in this dour, protestant, art-hating, unbohemian city, that’s not very friendly towards the festival itself,” she says. “I think that tension is really interesting.”

Despite the use of artificial body parts, including one obviously prosthetic penis, the sex scenes in the film are unusually explicit for a comedy. One gay encounter is liable to bring as many tears to its audience’s eyes as those of its participants.

Griffin, who is best known for creating Channel 4’s Glasgow-based comedy drama The Book Group, moved to Edinburgh shortly before filming began. But the 45-year-old filmmaker’s association with the festival stretches back to 1981.

“I did student theatre on the Royal Mile,” she recalls. “I did one-woman shows at the Traverse. So I have very vivid memories of my time here, of everything happening at once; the intensity of everything.”

Griffin’s take on the festival immediately chimed with the film’s cast.

Stephen Mangan, of The Green Wing, plays Sullivan and recalls doing “a play here about 14 years ago at quarter to one in the morning, which is a terrible time to do a show because you can’t go out and get pissed and the entire audience is absolutely knackered.”

“I’ve only played the festival a couple of times,” adds Daniela Nardini, who plays Gerard. “But I lived in Edinburgh for a couple of years and when I read the script, I laughed out loud. You just know it’s Annie’s festival experience. I loved that thing of someone doing a one-woman show at 9 in the morning and having earnest discussions with a paedophile priest. It brings a lot of weird creatures together and I liked the fact that she incorporated all of that.”

“You have these very extreme lifestyles,” agrees Raquel Cassidy, who plays Petra, Sullivan’s put-upon PA, and is best known for her role in Teachers. “From the amount you imbibe to the amount you stay up and the fact that you can fall in and out of love with everyone and everything, there’s a crazy, enterprising and exhausting humanity.”But how to successfully condense this multifarious experience into 15 main characters and 107 minutes of running time? Difficult, but not impossible claims producer Christopher Young.

“Although you’ve got hundreds of shows, the same themes keep coming through, in terms of what the performers are trying to do, their obsession with getting coverage, the fact that nobody’s coming to their show or everybody’s going to someone else’s. In the end, these are human beings, who have the same hang-ups – sex, money, success, failure – as the rest of us. It’s just that, at the festival, these issues become incredibly intense. The highs are high and the lows are lower.”

“With the stand-up Steven Dick, we came in, and with literally five minutes notice got 100 people who were already in the Assembly Rooms,” recalls Young. “Steven did his routine and we were out of there within an hour in terms of the audience stuff. I think that’s the only way you could do it.”

“There is a thing in film about wanting to control the world,” agrees Griffin. “But you can’t control the Edinburgh Festival. We were looking at what’s there and responding to it. We had a scene to shoot on Victoria Terrace and rather than saying ‘let’s clear everybody out of here’, we just got on with what we were doing. Nobody ever said to anybody ‘go away’. People would walk through shots and it was fine.”

Griffin even had the actors developing their characters away from the cameras, interacting with the crowds.

“I did a bit of vox popping,” recalls Nardini, “interviewing unsuspecting public who didn’t know Annie was hiding behind walls, asking people what they thought of the festival, her telling me to make sure I was quite down on it because my character is quite cynical and fed up with the whole thing. She’s fed up with comedy people and comedy awards.

“There was a live audience watching when I interviewed Steve Mangan for my morning radio show and that felt quite odd and I was quite intimidated because they weren’t extras. And because he’s quite rude in that scene, I felt edgy. I didn’t feel relaxed at all. In a normal acting situation it would be quite different but I think Annie quite liked the fact that I was uptight and would be that way with someone as rude as him.”

Despite “playing the funniest man in Britain, I never had to do any stand-up comedy,” laughs Mangan. “Thank God. Its like with golf and football movies. You don’t have to be an expert to tell that actors can’t do it very well.”

By contrast, Billy Carter and Chris O’Dowd, who play stand-ups Conor Kelly and Tommy O’Dwyer, are shown performing their act, and as part of their preparation, watched countless comedians and developed their own material.

“I saw about 35 at the Festival,” says O’Dowd “and it was a real education. It’s such a high pressure job having to make people laugh and my character is a bit bitter. I hung out with a comedian [Dara O’Briain] and in terms of his physicality, Tommy’s based on another particular comic but the rest is general observations.”

O’Dwyer enjoys a better festival than some in the film, but for Griffin, the motivations of these entertainers is every bit as important as the rewards for their act.

“I think the subject matter is dark,” she says. “It’s a cliché that comedians tend to be very serious, but in general I don’t think satisfied, happy people feel the need to perform. There is a neediness in performers. The relentlessness of that desire to get up in front of people has its dark side.

“Actors have to work together. Actors are in plays where they actually have to cooperate, whereas comedy is such a lone thing and it’s so competitive, that you’ll get people appearing to be drink buddies, but actually they’ll be in competition, which I think is part of the extremism. It’s not a supportive culture but they do share the battle, the venues that rip you off and all that sort of stuff. There’s a camaraderie there.

“The festival is all about being with people of the same intensity, just like putting this film together.”

A version of this article originally appeared in the Big Issue Scotland July 2005.