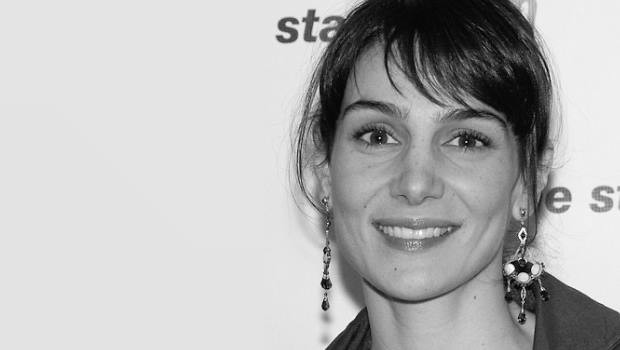 Writer-director Annie Griffin is in the loo when I arrive to interview her in the oddly named Blue Drawing Room of a private London club. Why is it a drawing room, I wonder; who withdraws here now that the Ladies are out passing the port and happily drinking the men under the table?

Thankfully Griffin walks in at this point, preventing me from going off entirely into a Georgette Heyer-inspired fantasy land. Best known as the creator of Channel 4’s idiosyncratic comedy series The Book Group, she talks candidly about making the transition from television to film.

“I had a very good experience in tv. I started working with Channel 4 comedy; the head of comedy there is Caroline Reddy, and she’s very good – great on scripts, into all the dark stuff, the complexity of characters. And I thought that, having made three television series (before The Book Group, Griffin directed a series called Coming Soon) that I was more than well prepared. We’d shot on 15 mill, and Book Group Series 2 had eight principal characters, we were shooting out of sequence over seven weeks. Every character has their own storyline, their own development. So I though that it would be easier shooting one story that people watch in one sitting even though there were fifteen, sixteen principal characters to keep track of.”

So it was less the complexity of the storyline than the politics of filmmaking by committee that nearly tripped Griffin up. Commissioned directly by Channel 4, she had the luxury of working with a small supportive team. On Festival, everything changed, she explains:

“As a filmmaker you have different financiers and though they may not know much about scripts or about editing they still have input. So you have eleven people in a room, all with different opinions. I never ignore anyone’s opinion, I want their feedback, but sometimes people aren’t all on the same bus. So its also a question of how you deal with that, just practically, how you keep people on board, how you don’t make them angry – or you do make them angry when that’s appropriate. That worked out on Festival because we had a really strong producer (Chris Young), who said we are making an 18 certificate film with sixteen principal characters, and we’re not getting rid of any storylines and we’re not getting rid of the sex scenes – those were the big arguments.”

Griffin’s comic sensibility, as anyone who has seen The Book Group will know, is dark and rooted in reality. Festival, though very funny, is no Hollywood rom-com.

“People get excited about comedy; we’d have a screening and people would be laughing and suddenly people would be saying we could make this a 12 certificate, then it will be really successful. And you have to say, no, no – it might be funny now but if you cut it – it won’t be. Chris Young and Caroline Neddy steered me through all that and I was very lucky to have them.”

Griffin, a former actress herself – and a performer at Edinburgh – is full of praise for her distinctly unstarry cast, which includes This Life’s Daniela Nardini, Teachers’ Raquel Cassidy, and Green Room’s Sean Mangan.

“The actors became really responsible for the characters which was great. There were moments when the actors pointed out mistakes in the script – for example, the Canadians were meant to be leaving, they said, ‘why are we talking about going to the Highlands when we should be getting on a plane?’ I’d got it wrong in the script and the script editor hadn’t caught it. So that was great, they were all thinking about their storylines.

On the other hand, you have sixteen people all asking ‘What do I feel here about so and so?’, but they were answering a lot of those questions themselves.”

Festival deals with some dark and controversial topics. Brother Mike, the troubled priest, whose one-man show is less cathartic than it is a Pandora’s Box; Petra, the alcoholic PA – there are no happy endings for these characters.

“Life is like that. You can be having a really funny day and then watch someone get hit by a car. It seems odd to me that you can go to a film and immediately know that no-one is going to die, and that they’re going to get together in the end. So often in American movies you know that in the first ten minutes. I like to work in a more unpredictable way that makes the cinema a very scary place, because its so uncertain, but also exciting. So I’ve always liked work like that – like Blue Velvet – love/lust, erotic and perverse, scary and funny.”

Griffin (45) grew up in Buffalo, New York, but came to Britain as a student. Her early cinematic influences were varied, but the ones that stayed with her are reflected in her work. She deplores the modern habit of basing creative decisions on the results of focus groups.

“People tend to want what they already know. When I was younger, in the late seventies I was lucky enough to see a lot of European movies, like Wim Wenders stuff. At the time I didn’t like it, because I had no frame of reference for it. But in retrospect I loved it, it was challenging, taught me a lot about movies, people, morality. So you can’t listen to people straight after they’ve seen a film, especially something they have no preconceptions about.”

Griffin also takes comedy very seriously. In the Comedy Awards storyline in Festival, people are continually dissecting comedy, discussing what’s funny, what isn’t. Daniela Nardini’s character, one of the Awards jury, launches a scathing attack on the conservative nature of stand up – of the need to be awards friendly and win prizes.

“People say ‘oh its just funny, its just a bit of fun’. Since when can you not talk about fun? At Edinburgh, people will have long discussions about what makes something funny, but a lot of actors will resist that. They don’t want to talk about meaning. I’m much more interested in meaning.”

Griffin does feel that the commercialisation of the Fringe is changing – she has documented a world that is fast disappearing.

“I think the comedy scene has peaked. There was a time when, if you won the Perrier you’d get a tv show straightaway. But a lot of those shows didn’t work; stand-up comedians don’t necessarily cross over to television well. But that was when there was a lot of money and a lot of focus on comedy in a very short time; there’s less of that now, much less focus on the comedians. Its more democratic.”

She dismisses this airily: “ The battle with the censors was won three years ago – with Intimacy – which had a real erect penis. In a way, I don’t want to talk about the prosthetic penis too much. People don’t notice, but in the oral sex scene, there’s a lot of pubic hair – it’s actually a prosthetic vagina. The camera was on Daniela’s chest, with Chris (O’Dowd) between her legs’ – she demonstrates the position – “ she’s wearing boxer shorts. She thought it was insane initially but actually it worked very well because otherwise she would have Chris O’Dowd staring at her crotch for four hours. This meant that he could play with the pussy, but it wasn’t her. And that worked for Lucy Punch as well.”

This strikes me as something that only a female director would think of, and as we discuss the changing moral landscape, and sex in the movies in general, I discover that Griffin feels that male directors are responsible for the pornographic, euphoric, artificial depiction of sex in the movies.

“There’s this big lie about sex, that we all get transported to another plane when we orgasm, but actually you don’t always orgasm, and the first time you have sex with someone its usually so embarrassing and awkward and its all about miscommunication. ‘When we take off our clothes we have union’, no, that’s bullshit. And any human being with a sexual history knows that’s not what happens, so why do we have to pretend that it all goes so perfectly?”