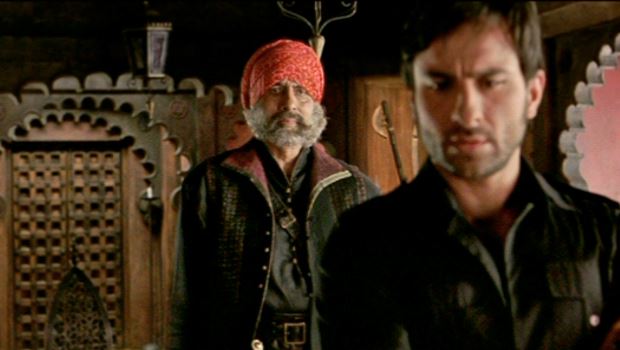 Summary: Not a typically Bollywood offering with a stirring dramatics.

Eklavya is the keeper of secrets; guardian of an ancient dynastic legacy whose duty it is to protect the erstwhile royal family in the once princely state of Rajasthan.

For nine generations his family has protected the Kings of Devigarh, a centuries old citadel in Rajasthan. Eklavya (Bachchan) trains everyday, from sunrise to sunset, with one steadfast goal in mind: protecting the king, the royal legacy and their secrets. In an independent, democratic modern India, the King (Irani) is merely a figurehead; an archaic relic of the past. But this doesn’t negate from Eklavya’s zeal toward his duty. With the passage of time his marksmanship becomes the stuff of legend, and his unflinching loyalty inspires ballads. But he remains in a self-imposed time warp, and the advent of time means his failing sight and aging body trail his intent.

The arrival of Prince Harshwardhan (Khan), for the deceased Queen’s (Tagore) funeral rites brings solace to Eklavya. Harshwardhan is barely tolerant towards the suffocating customs of his land but he feels a strange affection for the aging bodyguard and his eccentricities. But the fragile peace of the land is shattered by bullets. The bloodshed, which ensues engulfs the life of both Eklavya and the Prince. What follows is a contemporary edge-of-the-seat thriller with characters such as irreverent police officer Pannalal Chauhar (Dutt), the king’s wily younger brother (Shroff), his murderous son (Shergill), the mentally challenged princess (Sen) and the prince’s first love, Rajjo (Balan).

What follows is a story of deceit, intrigue, drama and revenge. Set in present day India, the film has a special resonance for today’s world, beleaguered by hate and violence born from fanatical belief. As Eklavya struggles to conceal the family’s gravest secrets; and modernity, time and kin conspire against him.

Vidhu Vinod Chopra has both directed and produced some of the most intelligent and memorable movies in India. He has, in his time pretty much been there / done that, after all – he garnered a National Award and an Academy Award nomination with his debut An Encounter With Faces. Pioneering gangster flick Parinda, partition epic 1942 A Love Story, thriller Mission Kashmir or the hilarious Munnabhai movies, Chopra equals class. A maverick in every sense of the word – pretty much anything from his stable now is usually always an instant classic. The trailer excites and looks intriguing, and perfectionist Chopra is sure to give us an exhilerating experience.