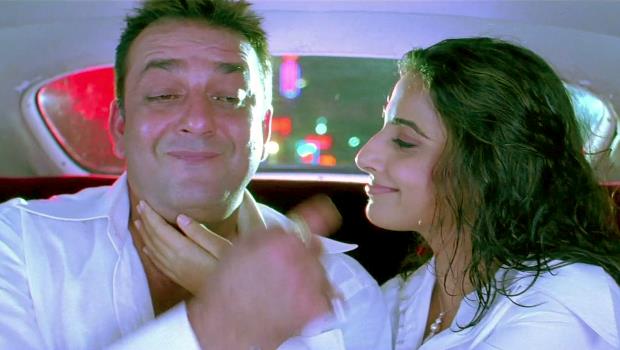 Summary: It’s interesting to see the movie try and revive Gandhian thoughts and teachings, and attempt to apply it in today’s world.

Talking straight – this is as original as it gets. Inventive story-telling; unabashedly spirited musical interludes and sharp-witted comedy… and thank God for some authenticity. A feel good comedy that makes you laugh and laugh a little more whilst ambling along with more of an understanding of Gandhian teachings. Lage Raho Munnabhai (loosely translated as Keep on at it Munna) is the sequel to the 2003 surprise smash Munnabhai MBBS.

Lage Raho… tells the story of local gangster Munna and his lost the plot sidekick Circuit (Warsi). Munna falls in love with a sprightly Mumbai radio DJ – Jhanvi (Balan). Enamoured by her ramblings on life, love and how we should make the most of both of these, Munna hatches a scheme to meet her by winning a competition on-air. The competition is about Gandhi, and in typical hoodlum style Circuit and co. kidnap Mumbai’s finest professors, historians and brainboxes to help win the competition… at gunpoint.

He does, but in the throes of meeting and trying to impress her puts himself forward as a professor with a deep knowledge and passion for Gandhiism. Here comes the glitch… Impressed by his candour Jhanvi asks him to come over to her house where she lives with her grandfather and his elderly friends to deliver a talk on the Mahatma. An old people’s home of sorts, they’re huge fans of Gandhi, and Munna can’t fake it this time. On scouring through history books divine intervention comes in the form of Gandhi himself, and the spirit of non-violence shows Munna the path forward with love and life.

The former instalment had our lead Munna, the lovable rogue with a heart of gold pretending to be a doctor to satisfy his parent’s aspirations. A huge sleeper hit, it was probably the first bona fide Bollywood smash to be re-made by a Hollywood studio (in production as Gangsta M.D. with Chris Rock). In this instance his integrity reaches another level as he tries to tread the path of righteousness.

Keep on at it… is definitely a spirited sequel, like the original it has a very clever screenplay and never takes itself too seriously – and that’s where its’ beauty lies. It speaks of the Gandhian way of doing things, with Ahimsa – non-violence and tries to apply this to a contemporary milieu without preaching. It simply highlights that thinking in a take it or leave it way, and then walks. The irony of it being preached by a gangster allows for a lot of laughs, especially when he tries to apply it in his in his own world… It’s written intelligently enough for it to be entertaining, funny, extremely clever, and a cut above your typical comedy.

It’s interesting to see the movie try and revive Gandhian thoughts and teachings, and attempt to apply it in today’s world. Especially in a light-hearted feelgood comedy such as this, but it doesn’t preach… No really. The lessons are there to be learnt from such a contentious figure, and it has been delivered in the most palatable way possible – with a huge smile. Unfortunately there’s nowhere near as much hugging as in the original, but that can’t take away from an exceptional movie.