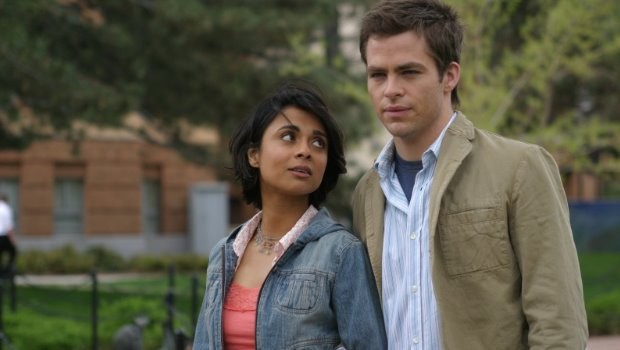 Summary: The cross-cultural differences are just another ingredient in this messy dog's dinner of a film.

You can imagine the pitch meeting for Blind Dating: its, like, the 40 Year Old Virgin, except the guy is, like, 22 – and he’s – get this – he’s actually blind! Everyone falls about laughing at the comic possibilities, and an executive gives it the green light – just like those Orange Wednesday ads. Oh, the humanity.

Star Trek’s Chris Pine is Danny, a good looking young man who has been blind since birth. Never having known anything else, Danny is happy and confident, an excellent basketball scorer, the apple of his parents’ eye; the only thing that is missing from his life is the love of a good woman. So his brother, Larry (Thomas), decides to help out by setting Danny up on a series of, literally, blind dates. Naturally these are disastrous (while affording opportunities for attempts at gross out comedy), especially when the women find out that Danny is blind. And then Danny finds out about a risky new operation that could give him the ability to see again.

In the meantime, of course, love is waiting under Danny’s very nose, in the form of Leeza (Ray), the receptionist at Danny’s opthalmologist’s office. In true Mills and Boon fashion, they take an instant dislike to each other that then morphs into a mutual attraction. But Leeza has secrets of her own…

The concept of Blind Dating made me uneasy, and the reality was even worse. I’m not sure which is more cliched; Pines’ portrayal of Blindness, or the film’s treatment of arranged marriage and Leeza’s family, so I’ll start with Blindness. I don’t know if Chris Pine observed any blind people while preparing for his role, but he seems to have decided that staring fixedly at one point, rather than looking at the person talking, was key. So he does it all the time. And he has quite a big head, so it just made me want to tell him to stand up straight. Danny seems self-possessed and sociable, so his lack of engagement with the opposite sex is bizarre and unconvincing. And then there’s the whole sci-fi/medical subplot… add to that Jane Seymour’s portrayal of Danny’s cougar psychiatrist, whose idea of therapy is to keep removing her clothes in front of him, and you can only wonder if the director has some sort of beef with the medical profession.

Obviously arranged marriages do take place in Asian families, and it would be silly to pretend they don’t, but the portrayal of Leeza’s family is just so condescending; naturally they own an Indian restaurant, which is called the Pink Elephant or the Taj Mahal or similar. The cross-cultural differences are just another ingredient in this messy dog’s dinner of a film which veers haphazardly from gross-out comedy to sincere drama via hackneyed romance never really settling on a tone and shoe-horning in far too many issues.