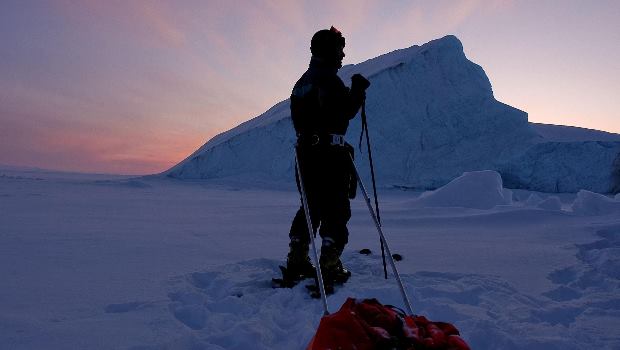 Beyond the Pole Review

Summary: Beyond the Pole offers a fun alternative take on all those Michael Palin, Ewan McGregor and Charley Boorman travelogs which tend to offer only the glossiest insights into global challenges.

Mockumentary done well generally pokes fun at the quirks of how real situations are caught on camera then presented back in a supposedly informative way to the general public. Often that means using stereotypical characters and poking fun at them in outlandish situations, much like Spinal Tap and Best in Show in which we see the foundation of fact beneath the stupidity and that’s why it works. In Beyond the Pole, Green Wing’s Stephen Mangan and Rhy Thomas of Bellamy’s People star as two hapless explorers being filmed for a documentary about their attempt to become the first carbon neutral, vegetarian and organic expedition ever to reach the North Pole unaided. It’s silly side is there for all to see, as is the inspiration of making Touching the Void with laughs, but there’s a coldness to the humour which struggles to find the loveable side of the pair so sorely needed.

Of the intrepid pair Mark Bark Jones (Mangan) is the most enthusiastic. He’s an eco-warrior who fully subscribes to his trip slogan of “don’t be impotent, be important” printed on matching t-shirts with strong views about saving the planet for future generations. He seems to have bullied best friend Brian Tongue (Thomas) into the expedition whose girlfriend is expecting their first child. Brian seems ill-prepared for the excursion and ill-advised – he doesn’t realise what he’s let himself in for. Mark, on the other hand, seems to have let his dream to get to the North Pole encompass his whole life, neglecting his wife and blindly forging ahead with preparations. When the day comes and they finally arrive on the edge of the Arctic, their inexperience tackling extreme conditions quickly become apparent, threatening their ambitions.

Watching these two dim-witted adventurers makes for an amusing double act as director/co-writer David L. Williams pokes fun at how eco-warriors can take themselves too seriously and initially their trials and tribulations travelling to the Pole make for light hearted banter. At its funniest, the pair run into polar bears their cameraman shoots to fend off from attack before two cocky gay Norwegians, played by True Blood’s Alexander Skarsgard and Lars Arentz-Hansen, cross their path on their way to the North Pole who also just happen to be carbon neutral, vegetarian and organic too. Their attempt to undermine these rivals and refuse even so much as a biscuit from them produces some good interplay, but it is when Brian and Mark’s bumbling takes a turn towards the more serious that Beyond the Pole loses its playful side and becomes lost in an emotional side that carries a weight the film can’t support. Despite this awkward end, Beyond the Pole offers a fun alternative take on all those Michael Palin, Ewan McGregor and Charley Boorman travelogs which tend to offer only the glossiest insights into global challenges. As a great double act here, it would be great to see Thomas and Mangan team up again in the near future.