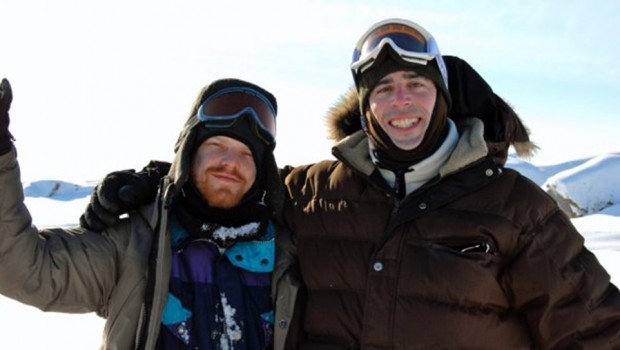 Comic actor Rhys Thomas is best known for playing Brian Pern in Bellamy’s People. He stars opposite Green Wing’s Stephen Mangan in Beyond the Pole, a mockumentary about the first unaided expedition to the North Pole by a vegetarian, carbon neutral and organic duo. Mike Barnard caught up with him about how he got involved and got paid to spit in Mangan’s mouth.

How did you get involved in Beyond the Pole?
I was asked to meet the Director David L Williams at a cake shop on Old Compton Street in 2007, so was dubious at first as I was almost a married man at that point. Anyhow, the script had been sent to me and I thought it was brilliant. Genuinely funny, genuinely moving, had a message and ambitious. Most scripts you get sent are usually crap, and being a comedy writer myself, I am probably too critical. Anyhow, it was good – the sort of film I knew my dad would like too. He likes classy films (and he liked this one).

So I met David. We got on well immediately, he was very enthusiastic , modest and unlike other people you meet who work in film, he wasn’t irritating and never once said the word ‘Movie’ which I hate.

He’d seen me years ago in a pilot for BBC2 called ‘It’s Ulrika’ , one of the first bits of TV I ever did (1997) with Ulrika Jonsson, produced by Reeves and Mortimer. I wrote and starred in a sketch playing a bullying Essex dad trying to teach his simple son to play football (it’s on You Tube somewhere). Anyhow, this stuck in David’s mind somehow as did Swiss Toni. Myself and Steve Mangan were then film put on tape together performing a few scenes from the script. This tape was sent to the finance people and a few months later, we were in Greenland. I never actually auditioned – I couldn’t believe it. I was offered the part. I felt like Jude Law for about, oh, five minutes.

I have probably gone on far too long….

What did you have to do to prepare for the role? Were there many challenges to spoofing a world record attempt to walk to the North Pole?
Sadly, no preparation apart from growing a beard and buying some thermals. I’d recently been to Lapland with my girlfriend so felt that prepared me enough – it was very cold and I had a go on dog sledge. In a way, the characters had no real preparation, they just did it. They weren’t supposed to be experts, I was no expert so that was all the preparation I needed!

The film has a great cast, what was it like working so closely with Stephen Mangan? Any on-set amusing anecdotes?
We got on very well. Considering we had only met on one occasion, we were suddenly in the thick of it together, knee deep in snow, cut off from home and all we had was each other. We were both getting married around the same time and our respective girlfriends were at home organizing things and we couldn’t be there. We couldn’t even ring home as there were no phones, internet or signals. We managed to get one or two phone calls out on the Satellite phone and that was it.

We stayed in a town with only 300 inhabitants. Hundreds of miles from anywhere. There was no sewage system where we lived so we were also too frightened to use the toilet as it was basically a bog seat with a bin liner beneath it – no flush! A cleaner came and emptied the bag for us every day, That was probably the worst aspect, one girl didn’t go for ten days! Boy, was she backed up.

One scene I did with Helen Baxendale was filmed on a train in the UK. We had permission to film as long as the train wasn’t moving i.e. we had the time it took to stop at the station, let passengers off and on and that was it – 90 seconds. So if the scene wasn’t right we had to wait 10mins for the next train and the next. Well, Helen and I on the third attempt got stuck on the train, the doors closed, and it was a non-stop from Litchfield to London. With no ticket. Luckily there was a problem and the train terminated at the next stop, 15 miles from where the film crew were!

On the last night, we all got stranded. We were in the airport hotel – which was a cabin with 15 bunk beds. We got drunk and myself and Alexander Skarsgaard did a topless Queen dance, me doing my best Freddie, he tried to pull my trousers down and bite my arse. It’s all on the DVD extras.

What did you enjoy most about the role of Brian Tongue?
I liked the fact I got to travel, that he was a likeable character and people would be on his side. It also gave me the chance to play dramatic scenes, which I haven’t done before. It was my chance to show that I could actually act! Although there may be people who aren’t convinced!

What was the most difficult scene to film?
There’s a scene when I talk to my unborn baby, direct to camera. I think I am dying and will never meet my baby or see my girlfriend again. It was very emotional and I wanted to make sure it made everyone cry. It did, luckily. At screenings, there’s always a huge silence at that point, people are moved so I am glad I pulled it off.

Also physically, the cold did get to you after a while and anything shot at night was tough because you could no longer feel your fingers or toes.

You trek to the North Pole with a message of being carbon neutral, organic, vegetarian and a tag line of “Don’t Be Impotent, Be Important”. Do you feel Beyond the Pole carries a serious message behind all the jokes?
It does carry a serious message without being worthy. Unlike the Inconvenient Truth, we use characters and emotion, not statistics to tell people that the ice caps are melting, this world could change forever, and there is very little time to make a change.

Have you ever done anything that might compare with an unassisted trek to the North pole?
I have never done anything so adventurous, no. Though I have drunk in some pubs in my hometown of Wickford on a Friday night which is pretty tough.

What do you think you would have done if you’d found yourself in the middle of the artic with a pair of gay Norwegian rivals and no wet suits to swim through the melted ice?
I’d have seduced one of them, maybe let him tickle my balls, thinking of England, and then steal the wetsuit without too much damage done.

Would you consider Beyond the Pole to sound a warning to how global warming is dismissed too easily by the general public?
I think everyone is aware of it, they are trying to do their bit but it’s still not enough. I’d hope the film would encourage people to go a little further. The last few lines of the film say it all…

What did you enjoy most about the filming?
Being somewhere that I have never been before and will never go again. It’s an experience that will never be bettered and the fact that I knew we were all part of a film that for us, or those who chose to see it, no matter how many, would come away feeling moved, amused and inspired. I also enjoyed the company and working with the cast – and David the director who brought out the best in all of us and gave us the freedom to improvise.

Did you really spit into Stephen Mangan’s mouth?
I did, twice!

Any horror stories? Or challenges?
The biggest challenge for me was food. I am a fussy eater and basically lived on seeds, nuts and baby food as there was nothing else I could eat. I lost a lot of weight.

Were you ever threatened by a polar bear in real life?
We had armed guards at all times to protect us from bears and walruses, which are a bigger threat. They can leap out of the ice without warning, dig their tusks into your stomach and suck your guts out. That’s a fact. A bear was spotted by a local one night, but didn’t come close.

What’s next for you?
I am developing a comedy drama with the makers of Life on Mars and Hustle called Raven. It’s about a middle-aged millionaire vigilante played by Michael Kitchen (imagine if Alan Sugar decided to fight crime in the dead of night). Death Wish with laughs I suppose. I am writing a film about three brothers who go to Thailand to find their dad who has gone missing out there – based on my life sort of. Also writing and directing a new feature documentary about the band Queen.

Beyond the Pole is out now on DVD. Read the Future Movies review here.