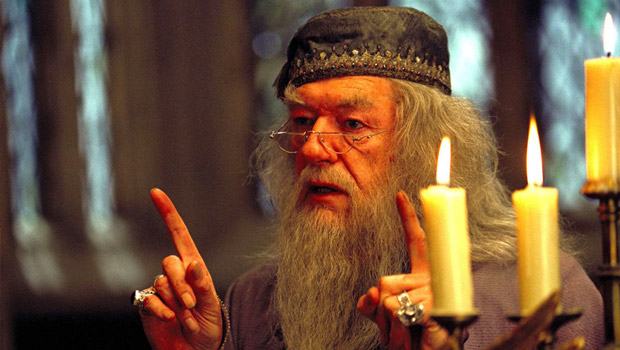 Sir Michael Gambon famously replaced the late Richard Harris in the role of Professor Albus Dumbledore in the magical Harry Potter movie series. Gambon’s successful acting career spans decades – and although he started out by treading the boards at the National Theatre, television and film work soon beckoned. With the fifth of JK Rowling’s epics, Harry Potter And The Order Of The Phoenix, the actor waxes lyrical about his time on set as well as his japes with Johnny Depp…

You’ve appeared in quite a few movies recently, Sir Michael…

I’m a theatre actor, but in the last 10 years people have given me parts in movies. I’ve taken them to get the money – and then I immediately forget what film it is. It’s all very nice, but it’s like water throwing over you. It’s all work to me.

Was it effortless to ease back into the role of Hogwarts headmaster, Albus Dumbledore?

Well, I don’t have to play anyone really. I just stick on a beard and play me, so it’s no great feat. I never ease into a role – every part I play is just a variant of my own personality. I’m not really a character actor at all.

What makes Dumbledore the greatest wizard of all time?

I have no idea. I just say what the script tells me to say. I learn the lines and say them – I don’t have much sub-text. There’s no sub-text in Harry Potter really, it’s all magic. Anything can happen.

Do you get on with the child actors in the film?

Yes, I do. The kids are remarkable – and I’m not saying that because I’m in the bloody film. Daniel is so cool and with it and on the ball. He seems unfazed by anything. The great luck was to get that boy.

Do children approach you as Dumbledore in the street, or are you free once the fake beard is off?

Children don’t usually recognise me, although a kid came up to me the other day. I was in Cornwall, and he said, “Gandalf, can I have your autograph?” [Laughs] I said, “Piss off!”

Well, he can shout.

Can you tell us about one of your practical jokes?

On my first Potter film, the director and I shoved a fart machine in Harry Potter’s sleeping bag. He had his eye on one of the extra girls and asked, “Can she be in the next sleeping bag to me in this scene?” She was a beautiful girl playing a non-speaking part so we agreed. I had the controller, and as soon as he wakes up in the Great Hall, I pressed the button. It destroyed his credibility with her.

Did you get the idea to use a fart machine from Johnny Depp? He’s used them on sets before, hasn’t he?

Johnny’s constantly using fart machines – but this one wasn’t one of his. I bought this one.

Have you played any gags on Depp?

My best joke on Johnny Depp was when we were filming inside this stately home in England. It’s the only place where the Queen can ride her horse from Windsor without going on public roads.

Well, the Queen came past one day – and everyone was gobsmacked. She obviously had her entourage, but next to her was a friend of mine called Henry Herbert. He was the 17th Earl Of Pembroke, and he’s also a film director. As they went past, I’m standing there with all the actors and Henry shouts, “Hello Mike.” So I reply: “Hello Henry, how are you mate?” The Queen waves like she was talking to me and on they went, but Johnny was speechless. He asked: “Do you know her?” And I said: “Yeah, she’s a mate of mine.”

And he believed that?

Well, he did because it was such serendipity. You couldn’t want for a better fake. I said to him, “I’m always nipping in her house for a cup of tea.”