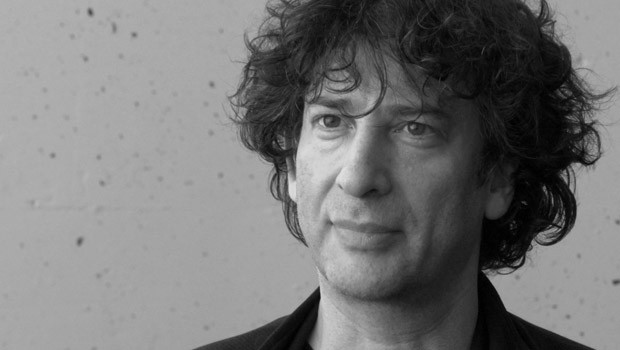 ‘I’m loving having a dog,’ Neil Gaiman says happily. ‘I’ve never had one before, ever.’

‘Yes, I rescued him. And its like the Chinese say, if you save someone’s life it belongs to you. No the best thing about having a dog is that its got me fit. All the walking. I have fifteen acres of woodland that had become completely overgrown, so I’ve had paths cleared, started keeping bees and I go for a couple of walks every day with the dog’

Screenwriters Neil Gaiman, Roger Avary and producer Steve Starkey are in London to talk about their new and much-anticipated film Beowulf, but having read on Neil’s popular blog that he was a bit bored of always answering the same questions at junkets, and had also recently adopted a dog after years as a cat person, I decided to throw in a non-Beowulf-related warm up question. HAving got matters canine out of the way, we moved on to the film. Which is, as said here and in many other reviews, a bit of a headf*&k.

‘It was just as weird for us, seeing it for the first time,’ Gaiman agrees. ‘Roger phoned and said what do you think, and I said, I don’t know. All I know is the critical language of film doesn’t work with the thing we’ve just seen: you can’t describe it with the vocabulary of live action films, but you also can’t describe it with the vocabulary of animation. It creates a paradigm that includes Anthony Hopkins performance as Hrothgar and – the dragon battle.’

There seems to be a concensus among filmmakers and critics alike, that Beowulf messes with your head.

‘It’s unsettling, isn’t it?’ smiles Starkey. ‘It’s such a different experience, this new artform. It’s almost overstimulating, like you need to go and have a coffee and talk about it afterwards.’

Avary, simply, compares it to taking hallucinogenic drugs. ‘It’s almost like looking at a popup book, or a graphic novel,’ Avary says, ‘and because its completely virtual, its almost like its pure imagination. What you’re seeing is something that’s completely imaginative, like you’re inside your own mind, watching a movie.’ But all are agreed that watching Beowulf, especially in 3D, is an experience like no other. So what were the challenges and opportunities that working in this way presented, compared with conventional film-making.

Starkey explains: ‘The first thing to look at is, what is the compelling reason for telling a story this way? With Beowulf it came down to character. Imagining the characters, how would they look, and can I find them in the real world? And I can’t think who Beowulf would be. What actor has the physicality that I’m looking for? The artform allows you to create the character that you see in your mind and then cast a performer. So with Grendel – he’s a 15 foot demonic character, but you want to bring him to life with an actor as great as Crispin Glover.’

Gaiman agrees: ‘I keep seeing this thing online, where people said, if they’ve got live actors, why didn’t they just shoot the live actors, and do it like 300, and make digital backgrounds. Well, we didn’t do it like that, because we wanted a level of reality where Grendel is just as as real as Hrothgar; Grendel’s mother is just a real as Beowulf. In which we can create a digital Beowulf and where we can get the sheer physical power and brutality of Ray Winstone’s performance in a six foot six inch Greek God type body; in which you can have a dragon battle that’s as real as anything else that’s going on, and in which you don’t lose sight of the humanity.’

Starkey adds: ‘Imagine a world that isn’t seen through the lens of a normal movie camera – in other words, if I just went on location, I wouldn’t see the imagery that we created in this movie, and that style of imagery is another reason that this form of film-making is well-suited to this story.’

Which brings us to another aspect of this way of making films. What on earth is it like for the actors?

Starkey laughs. ‘When they first arrive on the motion-capture stage; well, it is a bit different. There they come, in a sort of jump suit, dots all over their faces and bodies. But what happens, as soon as they start performing, the technology goes away, and the fact that they’re not always breaking up their performance with ‘can you just do that again because you missed your mark’ or ‘can you angle around in a bizarre way, so the camera can keep seeing you’ – all they’re doing is performing like a stage play. John Malkovich said, on most movies on any given day you’re on set, you’re probably actually acting for about half an hour. On this film, the days are shorter but you’re acting all day. You might be in your trailer for ten minutes.’

Of course similar changes to the actors’ physiques could be achieved through prosthetics but they bring their own challenges.

‘Prosthetics are a problem in two areas. One, they take hours to put on. Two, it limits the ability of the actors to perform by restricting their facial movements. We can build a Grendel in the computer and then let an actor build his performance, so that character can really live.’

But when Avary and Gaiman first thought of adapting Beowulf, with Avary planning to direct, it was going to be a live-ation film.

Gaiman laughs. ‘We had lots and lots of cheap solutions. The sea monster scene, for instance, in our very first draft., we actually imagined it with little Jan Svankmajer monsters’

‘And it would have been cute – little Beowulf fighting… On the other hand, you wouldn’t have got that ‘Oh my God’ feeling as the sea monsters attack.

With the huge advances in ‘home cinema’, is this kind of spectacular film-making what the industry needs to keep audiences coming to the cinema?

‘Yes, there’s no doubt that when you come out of the Beowulf experience, it feels almost bigger than cinema, I mean it’s experiential, not just simply that intimate storytelling that we’re used to. It’s a much bigger experience and one that simply can’t be duplicated in the home. So I think it will be something that the industry is looking for; a new reason to drive people into theatres and see movies.’ Starkey says.

So, how does Avary feel about the finished film?

‘I’ve been living with this as a project for at lest 25 years now, and had been obsessed with making this film myself, but seeing the movie now, I’m so absolutely proud of it, in an almost proprietory way. I feel a strong, stone connection with the film. And for me, who should be jaded, to be as excited as I am, speaks volumes about the quality of the film and about the level of collaboration that Robert Zemeckis afforded Neil and I.’