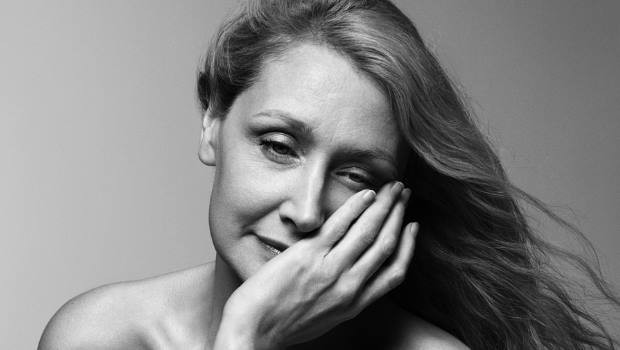 While she may have started her career in such studio projects as The Untouchables and The Dead Pool, Patricia Clarkson has become known for her commitment to American independent cinema. After playing the drug-addicted Greta in 1998’s High Art, Clarkson found herself in demand by such aueturs as Todd Haynes (Far From Heaven), Sean Penn (The Pledge) and Rose Troche (The Safety of Objects). In 2003, she won a Special Jury Prize at the Sundance Film Festival for her work in three films there – All The Real Girls, The Station Agent and Pieces of April, the latter of which went on to win her an Oscar nomination for Best Supporting Actress. Something of a mascot for leftfield filmmakers, it makes her participation in George Clooney’s Good Night, And Good Luck all the more appropriate. The story of CBS broadcaster Edward R. Murrow (David Strathairn) and his war-of-words with Senator Joseph McCarthy, Clarkson plays Shirley Wershba, who – together with her husband Joe (Robert Downey Jr) – works behind the scenes on Murrow’s news-team.

Q: Did you know George Clooney from your time working on Welcome to Collinwood?

Patricia Clarkson: Yes, I met him on Collinwood and I just think he’s truly one of the best people in the business. You look up ‘exemplary’ in the dictionary and there’s George. That’s exactly what he’s done – he’s put his money, and his fame, where his mouth is. After a while, what are you going to do with it? But you can actually affect change. You can actually make a difference.

Q: Can you tell us something about the responsibility that you have when you portray a real life character?

Patricia Clarkson: Well, there is a responsibility but, you know, Shirley, I think, was just so thrilled this story was being told and that she was part of it. I don’t think she was looking for me to mimic her, in any way, or carbon copy her. I was just extracting from her things that I could use, pieces here and there, because she’s a remarkable woman, and she still is. So I took what I could from her. There was some amount of impersonation but not a tremendous amount, but she’s not that kind of person. She is a witty, wise, kind of spunky woman. You know, when you’re playing, characters, for me usually it’s a much more internal preparation, but Shirley was right there, and she was incredibly helpful. And I found myself just taken with her. She’s clearly, I mean, a woman who was one of the boys. You know, she worked with a lot of testosterone surrounding her.

Q: Would you regard this as a guerrilla-style production?

Patricia Clarkson: No! For a million dollars a lot of other filmmakers could have made it. But to make it as beautifully and elegantly as we got to make it, and not make it guerrilla style, was an achievement. And God knows I know guerrilla filmmaking having been part of very low budget films. I was very grateful to have a toilet!

Q: What do you think about the film being in black-and-white?

Patricia Clarkson: You will never see a colour version of this movie. George is adamant. George and I did a picture for Men’s Vogue, and Mario Testino, George was on the cover and I came in to do this, and George was insisting it was in black and white. He wants everything associated with the film in black and white. Nobody can have colour stills, nothing.

Q: What is the reaction you want to ignite with this film?

Patricia Clarkson: My dream would be that all the 18-to-25-crowd fall in love with Murrow. I would love that. I think among the older crowd, people love it, hate it, the right wing, left wing and everything, but I would love my nieces and nephews to see what a great journalist can be and do – to take on one of the darkest moments in American history.

Q: What do you think the film achieves?

Patricia Clarkson: One of the things the film does, is it showcases a time when news meant something. People could actually turn on the news and feel like they were getting the truth. It doesn’t seem to exist anymore. People are incredibly sceptical and doubtful about what they turn on and see, because every news has a different opinion, offering the same story but different angles.

Q: What lessons can be drawn from the film?

Patricia Clarkson: In order not to repeat history you have to remember it, so if the film accomplishes simply that…it’s to raise the discussion. But I think what’s great about the film is I think it stands on its own, in spite of its message. I think it’s a beautiful film. I wanted to be a part of this film. I have very strong feelings about politics and about my country and about Murrow and McCarthy, but if it had not been well written and it did not have all of these great people involved, I wouldn’t have done it. Art is only as good as what you’re going to do with it, and the end result. So I just think that aside from all the discussions that this film hopefully will incite, what stands is that it’s a good film: it’s well written and well made.

Q: What do you think will happen in terms of how television news will change?

Patricia Clarkson: In terms of television, I’m a little more pessimistic. I find television a constant source of disappointment. I’m a news junkie. I find myself going from channel to channel and I wonder why, and it’s because there’s not one specific channel that can actually give me usually what I’m looking for. Our country is under increasing pressure to keep television on the straight and narrow, as our country moves continually to the right. I find I’m looking more and more for hope, but the reason I did this film is because it was when television was in its glory days. I hope that some day it will come back.

Q: Do you think journalism has changed for the worse?

Patricia Clarkson: It has changed for the worse but I don’t want to overlook. I think there are still brave men and women in journalism who are trying. Or you have someone like Jon Stewart who has really just flipped it, which I think is a brilliant stroke. You could never have had that in that day and time. You could never have had a Jon Stewart. Never. So I think, you know, it’s difficult. You know, I don’t ever want to discount the great journalists that are still working and continue to try doing great journalism.

Q: How do you think the role of women in television news has changed?

Patricia Clarkson: Thank god the role of women has changed in news. I think it’s better for it. I think in that day and time, Shirley really, truly had to remain behind the scenes. She was a researcher. But if you talk to the real Shirley Wershba, she will say she actually wrote the evening news at times but no one could know. I met the real Shirley, and got many, many stories from her. You understand how she had that position as you can see it in her now. In terms of preparing for this film…I’ve done a lot of ’50s movies! I feel like I was raised as an adult back then, though I’m not quite that old! I knew a lot about this time and about women in this time. I actually used a lot of my mother – she’s a councilwoman in the French Quarter of New Orleans. When George called me to do this film, he said, ‘You’re the only woman in this film. Do you think you can do it?’ But I was thrilled that there was some oestrogen in the film somewhere!

Q: Does your mother still work in politics?

Patricia Clarkson: She’s still going strong – at 69! She used to be state legislator – and now she’s councilwoman, and she’s in Heaven! She eats, breathes and drinks New Orleans. It’s her baby. My mother has always been political. She comes from a very political family and has always been very socially conscious. Her father was a remarkable man – there’s a park named after him in New Orleans. So we were also very aware. My mother is going to run for councilwoman-at-large in February.

Q: And what does your father and the rest of your family do?

Patricia Clarkson: My father is retired. He ran a children’s home when we were quite young. He has his Masters in technology. But he worked for Louisiana State University medical school, in New Orleans. He decided budgets and research and stuff, and worked there for quite some time. I have four sisters – I’m the baby of five girls! They all have real jobs with real lives! They’re quite remarkable, my sisters. One’s an epidemiologist, one’s a lawyer, one’s a schoolteacher, and one runs a business.

Q: With such a political background, do you hold strong views about the war in Iraq?

Patricia Clarkson: Personally I think it’s a mistake and I’m saddened. Now that we’re there and have caused the mess we have, I do think we have to figure out an exit strategy. My biggest concern now is that we have caused this and we have to try, to the best of our ability, to make the Iraqi people as safe as we can, to stop losing as many civilian lives that are being lost daily, which, to me, is staggering. But I think we will always been seen as an occupation, so our time has to be limited there. But I’m saddened that our country went to war.

Q: You’re next in All The King’s Men – another political film, right?

Patricia Clarkson: Yes, it’s based on, I think, one of the greatest novels in American history – Robert Penn Warren’s All The King’s Men. It’s loosely about the governor of Louisiana, Huey Long. And I’m born-and-bred New Orleans girl, so it means a lot to me. I play Sadie Burke, the mistress and press secretary to Sean Penn’s character. It’s about his rise and fall, basically. A Southern man who came from the sticks and became this incredibly populist politician – a chicken in every pot. It was a very large film, a very big film. Huge, huge – the film spans seven years.