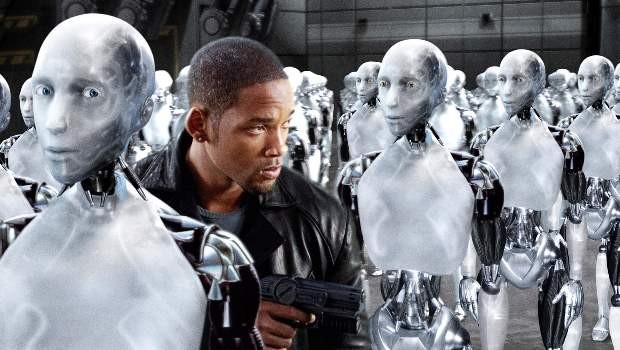 Summary: If you fancy a bit more meat on your big-budget summer blockbuster bones, I, Robot is what you’ve been waiting for.

Given that it only claims to be ‘suggested by’ the short stories of Isaac Asimov, anyone expecting I, Robot to have all but a tenuous connection to the work of the visionary Jewish-American writer, will be a little bit disappointed. Although the film’s plot hinges on Asimov’s 3 Laws of Robotics (which suggest that a robot can never harm a human), from here Asimov and I, Robot part company. Yet this is pretty much the only criticism that can be levelled against the film. For on the whole, I Robot is that rare of beasts: a fun but intelligent action film, populated by actors who divest their characters with more than one basic emotion.

In this, the latest film from director Alex Proyas, the world circa 2035 has developed a considerable reliance on robotic ‘Automated Domestic Assistants’. They have become a trusted part of everyday life; cleaning homes, walking pets and basically doing everything that humans can no longer be bothered to do.

On the eve of the release of the latest model robot, the NS-5, Dr Alfred Lanning, the father of robotics, seemingly commits suicide. Called into investigate is homicide detective Del Spooner (Will Smith) a cop who distrusts technology, especially in the form of robots. Aided by robot psychologist Dr Susan Calvin and a rather special NS-5 named Sonny, Spooner begins to investigate further, following the breadcrumbs of evidence that have been left by Lanning from beyond the grave.

As his earlier films The Crow and Dark City show, Proyas is an imaginative director, who creates darkly futuristic landscapes rich with atmosphere. Although I, Robot is admittedly at times a cinematic magpie, stealing elements from films such as Minority Report and Robocop, Proyas still manages to create a style that is essentially his own, bringing to life a not-too-distant future that has seen huge technological advances but that is still grounded in a recognisable reality.

In terms of narrative, although some will decry the dumbing-down of Asimov’s ideas, the very fact that a big budget movie revolves around the cracks of a seemingly unbreakable circle of logic in the 3 Laws is, within itself, a laudable achievement. In a world populated by empty, vacuous action films, it’s refreshing to see a production that tries to inject proceedings with at least a modicum of intelligence.

This intelligence, however, doesn’t cause I, Robot to forget that it’s supposed to be a blockbuster, and the film includes a couple of cracking action sequences. These are aided by the superb special effects employed throughout the film. In particular, with Sonny, I, Robot can boast what is possibly the most impressive CGI creation ever committed to celluloid.

The film’s standout asset, however, is its leading actor. For Will Smith is, to coin a phrase, the complete package. He has the impressive body shape that all action stars need to make their physical engagements believable, but in addition he has an insouciant bravado and a comedy timing that is all his own. Most importantly, unlike so many of his contemporaries, the man can act. As such, Smith moves seamlessly from kicking ass, to dropping wisecracks, to investing his character with complex emotional responses. As countless flops have shown, films resplendent with great effects still come a cropper without a solid performance to ground proceedings. And Smith delivers his performance in spades.

There is a slim chance that by trying to be an intelligent action film, I, Robot will attempt to please too many and end up satisfying none. However, if you fancy a bit more meat on your big-budget summer blockbuster bones, I, Robot is what you’ve been waiting for.

Related:
I Robot: Will Smith and Bridget Moynahan Q&A