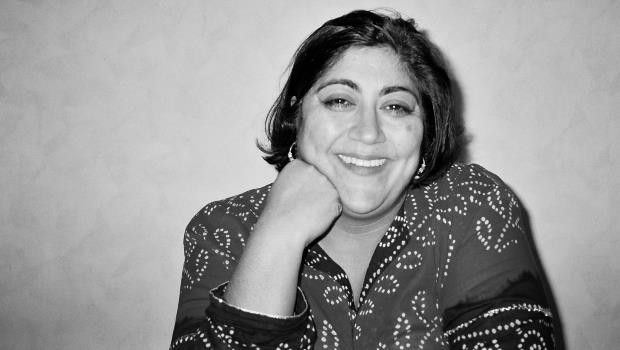 On a rainy Sunday afternoon, Future Movies had the pleasure of attending the Bride and Prejudice press conference, along with the film’s director, Gurinder Chadha, and three of her stars – her ruggedly handsome and particularly hirstute leading man, Martin Henderson; her leading lady, the ravishingly beautifully former Miss World and Bollywood megastar Aishwarya (Ash) Rai; and Nitin Ganatra who plays one of the film’s funniest characters.

Gurinder Chadha showed herself to be a very warm, amusing and enthusiastic person – she even took the time and trouble to change a dictaphone tape that had run out for some poor journalist, which is virtually unheard of. Clearly proud of her film, Gurinder spoke at length about a variety of issues surrounding it.

She talked about how, with Bride, she didn’t want to make a purely Hindi film for a Hindi audience. After Bend it like Beckham, Chadha felt that she had a global audience, so she decided to make a movie that introduced the Indian film language to this global audience, and to show that there is an alternative to Hollywood.

She mentioned that it was interesting how well Pride and Prejudice worked when placed in a contemporary Indian society, as well as on ‘home turf’. Bride had two screenings back to back for two very different audiences, one in Mumbai for a series of famous Bollywood ‘faces’, and one in Bath for the Jane Austen Society.

For the Mumbai screening, Gurinder was worried that the famous Bollywood producers present would think that she was mocking the Indian film language. And for the first ten minutes there was silence – all that could be heard was Gurinder stifling giggles at her own gags. Later, she discovered that the reason they were so quiet was because they found it strange to find Ash speaking in English, and that because Gurinder had shot lots of cows at the beginning of the film – an animal that is rarely shown in Indian cinema. As such, they had been shown a vision of their own world that they were not used to.

Two days later the film was shown in Bath for the Jane Austen society, with audience members dressed in regional clothes. The Austen people liked it because it worked as a movie, but retained what they saw as the Jane Austen spirit.

These experiences showed that Chadha had indeed achieved what she had set out to do –to make a global movie that took on a global language. The film had created a diasporic vision, which is why it can work in Bollywood and Bath, and shows how cinema can cross all kinds of boundaries.

When asked whether, when writing her script, she had her present cast in mind, Gurinder claimed that the more movies she makes, the more she gets into karma, and the more she gets into the casting process the more she believes in destiny. So many people could have the played the roles she ended up writing, that it was really down to fate that she got the cast she ended up with. Martin Henderson played a far more sensitive Darcy than she had envisaged. For Ash, it was the first time she had acted in English, and Gurinder thought she would have difficulties with the language nuances, but was shocked as to how well it worked – although Ash had not put on as much weight as she had wanted! Nitin created his character’s laugh, and little funny moments. He asked to be reigned in if he went too far with his character, but Gurinder never felt it necessary.

Asked whether she thought that the film might pave the way for Bollywood actors and producers to work in Hollywood, Gurinder replied, ‘undoubtedly’. She recounted how some of the film’s actors are now working on an Italian film, how Ash is being pursued by countless Western producers, and that Nitin has been offered work in an Indian film – so Bride will definitely be a launching pad.

Aishwarya Rai was as beautiful in the flesh as she is in the screen, although this reviewer felt she looked better with the 20 pounds she put on for her role, which she had now lost. Ash was slightly more guarded by Chadha, but this is unsurprising, as she is one of Bollywood’s biggest stars – hence the considerable number of Asian journalists at the conference, and the considerable amount of deference and interest Ash was paid.

Ash talked about how she approaches the films she makes on an individual basis, whether they are Bollywood films or not. For not even ‘Bollywood’ is one single structure. In India, movies are made in other regional languages such as Tamil or Bengali, and not just in Hindi in Mumbai. According to Ash, her experience on Bride was new, individual and fabulous. And she strenuously denied that she was going to be the next Bond girl.

Showing himself to be a funny man who in Bride plays a particularly funny character, when asked whether it was difficult to find the tone of his comedic role, Nitin Ganatra claimed that if the words are good, then 80% of the work is done for you. In Bride, more or less what was in the script is on the screen. The difficulty for Nitin was that although his character could be viewed as being quite lascivious, he also needed to be viewed with sympathy, otherwise the characters narrative pay-off (he marries Ash’s character’s best friend) wouldn’t have worked.

Martin Henderson seemed like a fairly pleasant but particularly hairy guy. However, the fact that most of the assembled journalists present were far more keen to hear from Gurinder and Ash was pretty obvious so, apart from a few friendly asides, Martin didn’t have that much to say. However, he did talk about how it was a strange experience playing a character completely opposite to him. He started travelling at an early age, and he took the opportunity to experience India as much as possible whilst he was filming there. Whereas, as his character Darcy, he had to don a suit and find India a challenging and unsettling place.

All in all, the Bride and Prejudice screening was a fairly happy and informative affair and it will be interesting to note the future careers of the four individuals present.