I found a lemon at the back of the fridge the other day that, judging by its somewhat distressed form, 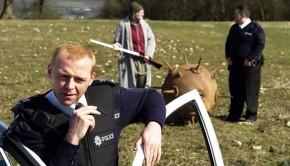 Try to imagine, if you can, The Wicker Man crossed with The Naked Gun. At that glorious intersection lies Hot

File this one under pleasant surprises. Genuinely funny romantic comedies aren’t something that come along very often, so let’s enjoy

That old cash-whore Dino De Laurentiis is at it again, taking his most lucrative franchise and milking it ‘til its

Sometimes it’s quite welcome when a press screening allows you the opportunity for a nice mid morning nap. Mostly though,

It’s always a disappointment to find out you’ve been misled by a trailer. Smokin’ Aces promises a balls-to-the-wall bullet fest

You could be forgiven for thinking that Denzel Washington actually is a cop, given the amount of times he seems

Just as some films can take a wrong turn early on and lose an audience, with only a miracle able

The rollercoaster summer season hits the up-slope again (seriously Tom and Audrey, was that supposed to be entertainment?) with this

You may have to excuse me. From time to time when confronted with a summer blockbuster that actually delivers on