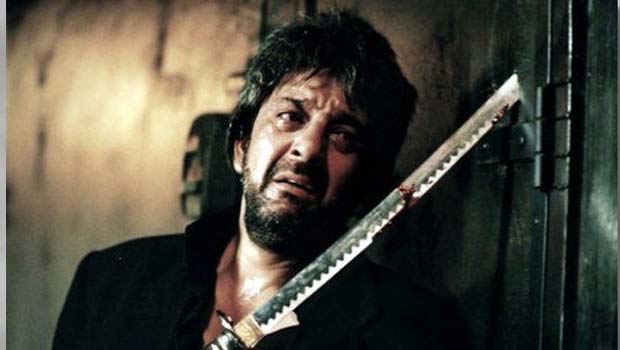 Summary: If you’ve seen the original, don’t watch this. If you haven’t seen either, watch Oldboy - this is strictly for Bolly aficionados.

Zinda, meaning Alive. Though the director shouldn’t be… Not that he’s made a terrible film, not by any means. This is as slick and polished as they come. But there’s something to be said for originality, of which Gupta is sadly, un-ashamedly lacking. Ohhhhh Yes, this is Oldboy – Redux, via Mumbai.

Zinda tells the story of Balajit Roy (Dutt) and his beautiful, luscious wife Nisha (Jaitley) living an idyllic existence in Bangkok. The opening scenes introduce us to his unbelievably annoying crony Joy (Manjrekar) who spends every other second accosting his wife, or literally threatening to. One fine day though Bala’s life is turned upside down, as he finds himself imprisoned without explanation or reason.

His attempts to get a word from his captors, never mind an inkling of why he has been imprisoned yields nothing but frustration and pain. Locked away in a cell, he is serviced by basic amenities including base living materials, washing facilities and a TV. Hell, he even gets to watch news of his wife’s death first hand. Bala’s gassed at regular intervals so that they can come in and crimp, cut and de-lice him. Cruel but hygienic. As days become months, and months – years, Bala’s will falters at times, but for the most part strengthens for the sole purpose of identifying and questioning his tormentor, of 14 long years.

Then inexplicably Bala’s released, having spent a third of his life locked away – without explanation. So much to ask, learn, know, and so much pain to inflict in return… Preferred tools: hammer or electric drill, literally. Cue the next stage of this twisted game, directed from afar by his behind the shadows tormentor Rohit Chopra (Abraham). So begins the hunt for his unknown enemy.

Gupta is a hack of the lowest order. He continues in his relentless rampage to copy as many controversial Hollywood movies as he can. Recent “adaptations” include Musafir [U-Turn] Jung [Desperate Measures] Plan [Suicide Kings] and Kaante [Reservoir Dogs – I s*** you not…]. It’s quite telling that Gupta has adapted much of the original from the south-east to south-Asian palate. The love making scenes are toned down, unlike the original Bala is never shown spanking the monkey… and most significantly the climax has been altered as in Plot Spoiler – It’s not the same twist, it couldn’t be, this is typically a Bolly positive audience after all…

Oldboy is an excruciating marvel of a movie. Not a cult without reason, it is the type of movie which stays with you for a long while afterwards, shocking with its audacity and sheer brilliance. Zinda has none of that, not the passion, grittiness, or raw zeal of the original. In fact, as a copy it seems to have missed the point altogether.

Yet somehow, on a superficial level it works. Looking at it objectively; for those that haven’t seen Oldboy, it works – unashamedly well, positive endings et al.

Technically and style-wise Zinda is flawless. Everything from the cinematography to the leads to sound design is a tad staged (this is Hindi cinema) but looks oh-so good. This is definitely one thing Gupta always has going for him, the content might not be legitimate or original, but the look and cut is as pristine as it gets. Ok, we’re a bit vexed they’ve lifted (without credit) a whole story, and lost the essence of the original in the process. But the whole premise; raw concept of Oldboy – wrath, revenge, and redemption is so alluring in itself, that even if you can capture part of it well, you still have much to work with. When coupled with the whole idea of being ensconced in a cube with little else to lose apart from your mind…

Performance-wise Dutt is apt, actually this is probably the pinnacle of his career – tortured is his forte. Abraham suave and powerful, Dutta and Jaitley simply easy on the eyes. The music is subtle and along with the blue haze / sepia tints help pace the film. A watered down version of Oldboy, it still manages to retain much of the gore and violence. Regardless of that, it is so far removed from your typical Indian fare that it is bound to be appreciated for that reason alone. If you’ve seen the original, don’t watch this. If you haven’t seen either, watch Oldboy – this is strictly for Bolly aficionados.