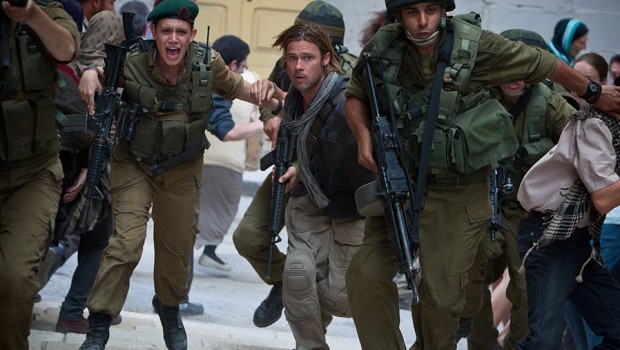 Summary: The zombies are efficient enough; scary, ugly, making you jump at certain points and nauseous at others. But we don't quite get the payoff we so want.

We see Brad Pitt utilising that lean, under-stated, charming demeanour to great effect in yet another disaster movie this summer. In this much talked about zombie drama based on Max Brooks’s unfilmable book of the same name, with somewhat mixed results.

Pitt is retired UN Investigator – Gerry Lane, getting used to the vagaries of being a househusband and catering to the needs of his teasing but loving family. Ignoring news reports on suspected rabies outbreaks, and seemingly trying to avoid anything remotely related to a life laid to rest. The inevitable volte face comes pretty much minutes into the movie, when a street of packed traffic gives way to panic, pandemonium and transformations of a somewhat apocalyptic kind.

Here we see the zombies take form for the first time, infecting others and letting their carnal instincts go wild. The Lanes escape, somewhat shaken, and make their way to an apartment block where Gerry’s UN contact extracts them to a US Naval ship off the east coast. Once there they see military personnel, intelligence analysts and leading theorists trying to make sense of the outbreak, whilst monitoring civilian activity (read: casualties) throughout the world.

Consensus amongst the gathered intelligentsia is that the plague is a virus, whose origin must be discovered in order to understand it and develop a suitable vaccine. The Naval Commander asks Gerry for his help in investigating the outbreak alongside a SWAT team, based on previous expeditions, and essentially to justify his family’s presence on the ship. The sojourn leads Gerry to Korea, Israel and beyond as casualties rise exponentially, and zombies take over the world.

The film works mainly on the performances of Pitt, and a strong ensemble cast that lend some credibility to a somewhat disjointed script. Obviously the movie deviates massively from the book, which covers so many scenarios, countries and myriad stories, that it would be impossible to fit into a movie. A series would be more apt, giving more context and credence to its epic outlay. Despite simply touching on some of the book’s socio-political, religious, cultural and geographical context, Forster still manages to string together a cohesive narrative of sorts.

It’s easy to see where rumours of re-writes, unfinished scripts and discord between Pitt and Director Forster could have happened. As this is utterly epic in its scale, and with source material so vast, where to start and what path to take? The zombies are efficient enough; scary, ugly, making you jump at certain points and nauseous at others. But we don’t quite get the payoff we so want.

It’s not quite the hatchet job many had predicted, but you’re left at times unsatisfied with minor plot points: Post plane crash, Gerry and his bodyguard are the only survivors… Whilst fleeing zombies at Camp Humphreys, out of seven people he’s the only one to survive… Much of the happenstance seems to be too unbelievable to work or be credible. To that extent, personally I found the conclusion unconvincing. To say more would be to give away the plot, but it’s passable fare, or as our Bollywood counterparts term it: timepass.