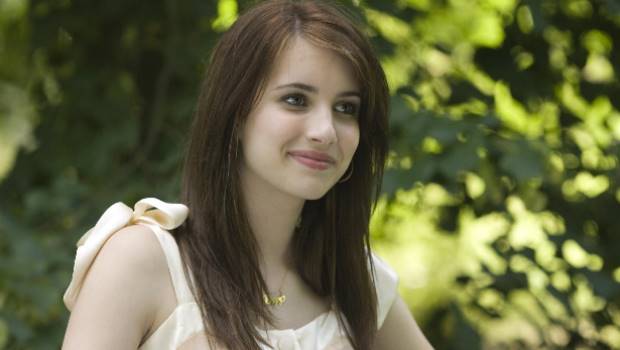 Summary: Wild Child is about as deep as a mug of hot chocolate and just as enjoyable.

Wild Child is one of those guilty pleasures, a bit like Mean Girls and Thirteen Going On Thirty, which cuts through all acquired patinas of sophistication and go straight to the inner twelve year old girl inside.

Poppy (Roberts) is a fairly typical LA teenager, self-obsessed, vacuous, spoiled and utterly sheltered. After the death of her mother, she and her father (Quinn) have been increasingly distant; he makes up for it by showering her with material goods and money while failing to give her the attention she craves; when a prank finally goes too far, rather than dealing with her properly he packs her off to an English boarding school – worse, an all girls’ English boarding school – where she is expected to learn lacrosse, wear a hideous uniform, and hand her mobile phone over to Matron (Henderson, in the second of two roles this week). Her father, and the headmistress (Richardson) hope that some discipline will turn Poppy into a lady.

And of course it works. After some initial – and frankly not too naughty – acts of rebellion (these girls don’t even smoke, let alone do drugs), Poppy is won over by our British charms. She discovers that her dorm mates, including ‘Angus, Thongs and Perfect Snogging’’ Kimberly Nxon and ‘Atonement’s’ Juno Temple won’t tolerate her brattish ways and, realizing that her friends in LA have forgotten her, decides to knuckle down and get on with things. And though she makes an enemy of the dominatrix-lite head girl Harriet (Georgia King) she discovers there are compensations in the form of Freddie (Pettyfer), the Head’s cute son, who is forbidden to date the girls.

Wild Child is about as deep as a mug of hot chocolate and just as enjoyable. It’s the classic poor little rich girl redeems herself story and while there’s nothing particularly new about it girls will love it. Poppy is never so bad that we don’t side with her; she is mostly ridiculous with her sanitizer spray and her shrieking, which is soon beaten out of her by England, plus we have already realized that she is actually lost and lonely, grieving for her dead mother, and needs real friends who will give her a hard time when they realise she is behaving like an idiot.

The romance with Freddie is a bit soppy; it’s never terribly clear what Freddie actually does or where he lives. He is totally set up as boyfriend material for Poppy and it doesn’t really matter about his personality; he exists simply as an object of desire, and to be the cause of Harriet’s jealousy – he is a plot device pure and simple. And pretty with it, if you like blonds. But actually where the story is much more interesting is where it touches on that old and almost forgotten idea of a woman’s film. Poppy leaves her world of boys and flirting for what almost amounts to an enclosed order, and she learns to bond with other girls. Their friendship, and not Freddie’s clumsy kisses, are what causes her emotional growth and ironically, this is where Wild Child is very old-fashioned. Poppy dies her blond hair brown, buys a party outfit from a charity shop and leads the lacrosse team to victory, embracing the uber-English values of fair play, thrift and teamwork. There is even a sort of homage to ‘Spartacus’ when Poppy is accused of a crime she didn’t commit. And this at a time when WAGs and conspicuous consumption is all the rage? Maybe Wild Child was anticipating the credit crunch?