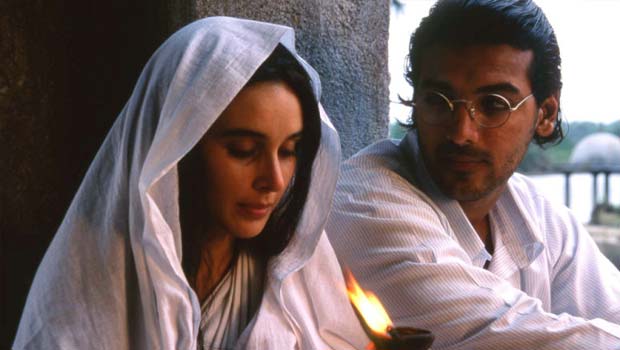 Summary: An immense movie, daunting at times yet unforgettably touching; the images of Kalyani and Chuihya will stay with you for a long while afterwards.

“A widow should be long-suffering until death, self-restrained and chaste” So begins Water, with a quote from 2000 year old sacred Hindu texts – The Laws of Manu…

The third instalment of Deepa Mehta’s elemental trilogy, Water tells the tale of brow-beaten oppressed widows in early 1900’s India. Our eyes and ears are that of infant widow Chuihya (Sarala) as we follow the story from the death of her aged spouse, and her transfer to a widow’s commune at the tender age of eight.

Away from her family the newly appointed widow is indoctrinated into the severities of a celibate life, sorry – a widow’s life… Sleeping on concrete floors, only allowed to wear white linen cloth, disallowed sweets, meats or spices (flesh and condiments arouse passion, allegedly) and that’s a sin, as is any form of enjoyment… The ashram is run by self-seeking queen-hen Madhumati (Manorma) part-senile, part-opportunist, completely lacking in conscience.

She uses doctrine as she pleases to suppress the widows and maintain her tyrannical position, in an utterly corrupt manner. This includes utilising the widows as prostitutes for the aristocrats and gentry, in order to help fund the ashram. When freedom activist Narayan (Abraham) falls in love with breathtakingly beautiful young widow Kalyani (Ray), and Shakuntala (Biswas) finds out the truth about what faith and community really dictates, there are more than a few ripples… As both women gradually question their lowly place in Indian society the film moves towards some heartrending conclusions.

This is a studied, tragic, and emotionally brutal film echoing the plight of millions of widows all over India. Though set in 1930’s social, political and religious upheaval, much of these diktats are still prevalent in rural India, with widows condemned to a life of celibacy and oppression. As has been highlighted in Water many are forced into prostitution, to beg for alms, or simply subject to a lesser existence.

Cinephile social activist Mehta has always been a controversial film-maker, with Water being no different. Initially shot with a different cast in 2000, production was halted in the holy city of Benares, India when Hindu fundamentalists took umbrage to the subject matter. Fast forward to 2004 and Mehta shot the film under veil in Sri Lanka under the pseudonym ‘River Moon’. The end product amply supports her decision to complete her film. Intended as the final part in Mehta’s trilogy that began with Fire (1996), notorious as India’s first film depicting lesbianism, and followed by Earth (1998), which looked at events leading up to the partition of India in 1947. The common thread within the trilogy seems to be that of oppression, differences and equal rights, be they based on sexuality (Fire), communalism (Earth) or gender (Water). All also subjectively told from a woman’s point of view.

Like previous instalments in the trilogy Water is utterly brutal. It isn’t preachy, but highlights harsh ancient marital customs that forbade widows to lead normal lives after the death of their partners. Interlaced with mumblings of Gandhi and the freedom movement, it asks: Are women to lead their lives as prescribed by a religious text that was nearly two thousand years old? Water highlights whether these injustices are innate to the religion or a by-product of chauvinistic interpretation. Its’ controlled passion is what makes it work; it asks a lot of questions, but the answers are bare for all to see.

Beautifully shot and sensitive to the core, Mehta has made a very strong statement with her characterisations, which are subtle yet complex. As in all her movies she explores the extremes they face, and the strong – usually negatively finite outcomes of their own personal journeys. Sarala as Chuihya is a sheer delight to watch; her innocence and bewilderment of the circumstances before her somehow mirror that of our own. Her childlike wonder a revelation, moreso when you realise Sarala doesn’t speak a word of Hindi or English and learnt all of her lines phonetically. Ray plays Kalyani with a subtle innocence – of beauty conditioned to be submissive, whilst Biswas as Shakuntala is the newly enlightened conscience of the movie, the rambunctious Chuihya its’ soul.

Even though the protagonists go through their own baptisms of fire, there is such beauty in the souls of their characters. Despite the poverty and seemingly bleak outlook, there is a certain dignity, truth and absolute grace in their demeanor – and the film. It has been framed beautifully, looks authentic (stark in a Ritwik Ghatak way) and far from staged. With the same thought-provoking mixture of passion, insight, and cultural sensitivity she brought to her previous films, the underlying theme of Water seems to be that of courage, hope, and never losing one’s faith.

An immense movie, daunting at times yet unforgettably touching; the images of Kalyani and Chuihya will stay with you for a long while afterwards.