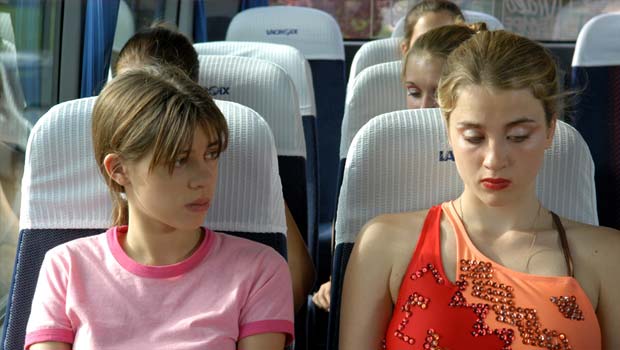 Summary: The intensity, and physical closeness of teenage girls, and their thoughtless cruelty is captured brilliantly .

Synchronised swimming has never been taken seriously as a sport despite having Olympic status, but this French film by debut director Celine Sciamma, set in the highly competitive world of aquatic sports, could change all that.

Gawky Marie (Acquart)is fifteen, a little bit awkward and desperate to fit in, with a painful crush on the beautiful Floriane (Haenel), star of the girls’ team, confident and sexy and with a bit of a reputation as a man magnet. Despite the fact that they have nothing in common, Floriane carelessly indulges Marie, allowing her to watch practices in exchange for helping her sneak out and meet her boyfriend, Francois (Jacquin), who Anne (Blachère), Marie’s chubby friend, desires fruitlessly in her turn.

Surprisingly, Marie and Floriane become friends, and Floriane reveals her secret – she is still a virgin, despite the best efforts of most men she meets, including her swimming coach who is always trying to get her on her own. Floriane plans to lose her virginity to a stranger. It’s a burden, something to get rid of so she can get on with sleeping with Francois. Anne, in the meantime, excluded by her former friend, is giving Francois what he doesn’t get from Floriane, in the hope that he might come to like her.

Celine Sciamma’s debut is a dreamy meditation on first love, with all its attendant horrors. The self absorption of adolescent is perfectly reflected through the metaphor of synchronised swimming, a closed world with its own rules, a clear hierarchy, and a sort of steamy moistness that is almost distressingly aposite. The sheer awfulness of teenage girldom is underlined by exposing the gulf between the pretty and the not-pretty. Floriane carelessly recounts stories of the men who have approached her sexually; then she turns to Marie, inviting her to share her stories of encounters with horny men – Marie, all lank brown hair and shapeless clothing, silently shakes her head. Yet beauty is a burden too; because Floriane is pretty, it is also assumed that she is and must be sexual, whether she likes it or not.

The intensity, and physical closeness of teenage girls, and their thoughtless cruelty is captured brilliantly – Marie and Floriane share a towel, shivering. Marie dumps Anne, telling her she is a burden. The other girls on the swimming team taunt Floriane, calling her a slut. The film dares to witness the lives of teenagers in a manner that perhaps only a woman director can – the camera wandering through the changing rooms, dwelling on the youthful bodies in an eroticised haze.