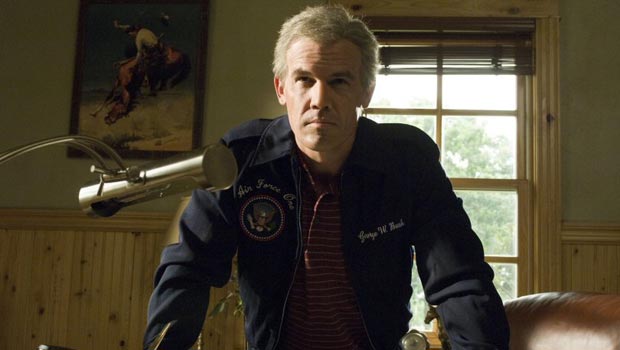 Summary: W. is an easy-to-watch but ultimately shallow compiling of a few key moments of Bush’s life.

Oliver Stone, not known for his subtlety, delivers a biopic of one of the most ridiculed US Presidents: George W. Bush. Yet, far from being a damning indictment of his War on Terror or an excuse to poke fun as the much-maligned son of a one term Head of State, W. courts sympathy for Bush Jnr. as a man driven by his failings earlier in life. It’s effectively a defence of many of George W. Bush’s criticisms which uses just a handful of Bush’s key decisions as President on which to base judgement.

W. starts in the Whitehouse in 2002. President Bush is discussing what would become the term “Axis of Evil” as he and his aides consider how best to coin a phrase for the Middle East countries targeted in War on Terror. Potentially it’s a fascinating insight into the decision-making process or an ideal opportunity to poke fun at those involved, however Stone plays the scene on the fence, seemingly unsure which path to follow. Similarly Josh Brolin’s Bush veers between spoof and an accurate mimicry, Jeffery Wright plays it completely straight as Colin Powell and the other actors have a similarly confused tone to their performances. This confused initial scene is followed by Bush’s experience of college where he passed his inauguration where his talents on the baseball field were matched by his ability to drink and get into trouble. Bailed out by his dad, George Bush Senior (Cromwell), he tosses aside jobs before coming to his senses as a born-again Christian and getting a taste for politics to match his fathers. We all know where the story leads, yet Stone manages to miss the juicy bits.

Depicting Bush’s unruly youth, Stone shows an ignorant, hot-headed man who speaks out of turn and doesn’t care who he offends. These his early years are spliced with scenes from his first term as President but at no point do we see any events from the 9/11 attacks or Bush’s handling of the events straight afterwards. The focus for W. is how Bush overcame his demons and took office, glossing over anything which might seriously offend or cause heated debate: perhaps the most controversial scene sees Mr. Fantastic himself, Ioan Gruffudd, do a poor imitation of British Prime Minister Tony Blair.

Other potentially fascinating elements to Bush’s life not clear in W. are how he came to become the born-again Christian or a reaction to the claims a dubious vote count saw him become President. At times it even feels as though his dad is getting more of a grilling than the subject of the movie himself. Stone seems intent to show Bush was a man who may not have been the sharpest tool in the box and made mistakes in his life, but he did his best as President given the situations he found himself in. He suggests his aides let him down in the hunt for the weapons of mass destruction and could have offered better advice to their leader. Many will have been hoping for something to really sink their teeth into with W. and eagerly awaited Stone’s take on the man Barack Obama will replace: it winds up unconvincing as a history lesson or true character study. W. is an easy-to-watch but ultimately shallow compiling of a few key moments of Bush’s life which ends with the same shrug of the shoulders as Bush gives in response to a question he cannot answer: did he make any mistakes as President? The evidence on offer here is as lost for words as the man himself.