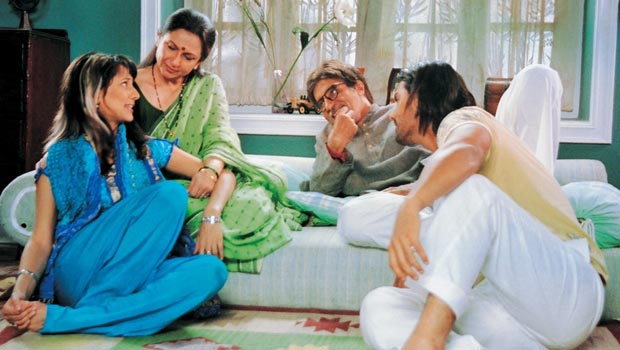 Summary: A tearjerker that will make one sit up and think about the implications of the sudden deconstruction of the family unit.

Viruddh meaning ‘Versus’ explains an elderly couple’s struggle to find justice for their son in the face of adversity, corruption and inconsolable grief.

The movie starts with Vidyadhar and Sumi Patwardhan [Bachchan and Tagore] enjoying an earthy suburban bliss in their twilight years. As we – the audience, get to know this typical middle-class couple, and the quirky sweet intricacies of their relationship. Bachchan as Vidya is a hugely endearing down to earth father-figure, whilst Sumi a former headteacher hasn’t lost her matron-esque ways.

They dote on ‘ideal’ son Amar [Abraham] who’s studying in London, and has a penchant for brawling in nightclubs, though he doesn’t actually seem to get much studying done… He meets girlfriend Jenny [Dandekar] whilst in London, and they repart to his parents abode in Mumbai. When Amar becomes engaged in yet another fracas there, the repercussions are far-reaching and almost too much for his parents to bear.

Much time is taken to set the scene, especially with Bachchan’s motley crew of friends – a senior citizen’s version of the Breakfast Club; all looking for some action beyond their typified routines, but only as long as the angina stays in check. Tagore in her comeback vehicle impresses highly, but we expect nothing less from the grand-daughter of Rabindranath Tagore [the greatest scribe from south-Asia] that made her debut with Satyajit Ray [arguably the greatest film-maker from south-Asia..] Whilst her Sumi dominates a hen-pecked Vidya in the first half, he amply takes over the reins and shows his resolve later on when calamity begins to unravel their quaint existence.

Bachchan’s performance grips you and reels you in. The film may be ordinary, but Bachchan – far from it. He is simply phenomenal, and here we see the reason he is a living legend and the biggest movie star Bollywood has ever seen. He was compelling in Waqt, commanding in Sarkar, and astounding in Black. Yet here he is simply phenomenal, and the soul of the movie with the subtle nature of his performance. His scene in the latter half where he breaks down yet tries to laugh again is heart-wrenching, and simply ingenious. Abraham as narrator is endearing, and incredibly affable throughout.

Kudos to Manjrekar on digressing from his staple gangster flicks and handling a story with far-reaching issues, that too with great sensitivity. We’re taken through the parents painful journey for justice, as their frail vulnerability becomes all too obvious. One can feel the pain and plight of the aged couple and empathize with them. But Manjrekar fails in keeping his first half taut, much of which is spent with light banter and padded out with simply un-needed scenes. More time should have been spent in the latter stages of the film, fleshing it out and giving it some plausibility. It feels as though the climax has been somewhat rushed, as a result making it not all convincing.

Loosely based on Todd Field’s In The Bedroom this is sweet family movie turned high-drama. Essentially a tearjerker that will make one sit up and think about the implications of the sudden deconstruction of the family unit, and the far reaching effects this has on each member mentally and emotionally.